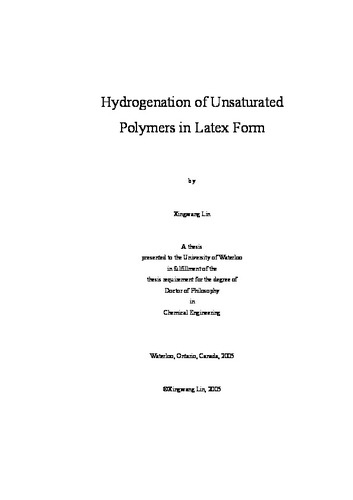 Diimide generated from the hydrazine/hydrogen peroxide/catalyst system can be used to hydrogenate unsaturated polymers in latex form. As an economical and environmentally benign alternative to the commercial processes based on hydrogen/transition metal catalysts, this method is of special interest to industry. This thesis provides a detailed description of the diimide hydrogenation process. Reaction kinetics, catalysts and gel formation mechanism have been investigated. <br /> <br /> Four main reactions and a mass transfer process form three parallel processes in this system: diimide is generated at the interface of the latex particles; diimide diffuses into the organic phase to saturate carbon-carbon double bonds; diimide may be consumed at the interface by hydrogen peroxide, and may also be consumed by the disproportionation reaction in the organic phase. The two side reactions contribute to the low hydrogenation efficiency of hydrogen peroxide. Slowing down hydrogen peroxide addition and using stable interfacial catalysts may totally suppress the side reaction in the aqueous phase. The actual catalytic activity of metal ions in the latex depends on the hydrogen peroxide concentration and the addition procedure of reactants. Cupric ion provides better selectivity for hydrogenation than ferric ion and silver ion do. Boric acid as a promoter provides improved selectivity for hydrogenation and faster diimide generation rate. The side reaction in the rubber phase results in low efficiency and gel formation. The rate constants of the four reactions in this system are estimated. <br /> <br />It is shown that the hydrogenation of nitrile rubber latex with an average particle diameter of 72 nm is mainly a reaction-controlled process. Diimide diffusion presents limitation upon hydrogenation at high hydrogenation degree range. Antioxidants can not effectively inhibit gel formation during hydrogenation. Hydrogenation of a core-shell latex with NBR as the shell layer should be able to achieve a higher efficiency, a higher degree of hydrogenation and a lower level of crosslinking.