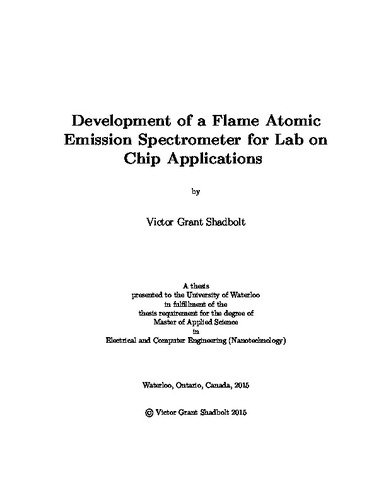 Flame Atomic Emissions Spectroscopy (FAES) is a powerful spectroscopic technique for trace metal analysis, however, the applications of the method is severely curtailed by its inability to deal with complex samples unless substantial sample preparation, typically elaborate and time consuming, is performed. Some examples of interferences include the classical spectral interference between Sodium (Na) and Calcium (Ca) and the prominent matrix interference between Aluminum (Al) and alkaline earth metals, in either case leading to an inability to detect the weaker spectral signature. As a result, despite being the one of the oldest chemical analysis techniques, the use of FAES in an industrial setting is primarily limited to the detection of Na, Ca, Potassium (K), Lithium (Li), and Magnesium (Mg) within simple samples. In addition, the future of health care sees the use of Point-of-Care (POC) Lab on Chip (LOC) devices integrating one or more laboratory functions onto a single platform; typically utilizing microlitre sized volumes. These microfluidic devices, when fully developed, may contain the ability to acquire, pretreat, separate, post-treat and detect a variety of samples. This has great potential to revolutionise the health-care industry by providing fast, automated, and inexpensive POC diagnostics. A POC implementation of a FAES and LOC device would be of great importance to the medical industry. Here, we develop the infrastructure to fabricate an ElectroThermal Vaporizer (ETV)-FAES for the purpose of addressing this limitation with complex samples; we also prepare the device for coupling to these LOC POC devices. This incorporates the engineering design surrounding the electrical hardware required for sub-micromolar detection capability on microlitre sized samples with a total expense of less than $500 CAD; excluding the spectrometer and computer. In addition, this hardware has been designed for, and is being utilized to fabricate, a LOC POC diagnostic instrument. The addition of an ETV to the FAES improves the sample introduction efficiency, enables smaller sample volumes, improves limits of detection, and enables the ability to process complex samples while minimizing interferences. The software is predominantly written using Python 2.7 to enable portability between operating systems. Modern engineering tools are utilized to fully test and analyze the hardware and software timings to confirm proper operation. Limitations in commercial hardware are identified, and presented; and appropriate fixes for these limitations are implemented. This work gives a preliminary demonstration of an inexpensive, propane-only, FAES system that could be adapted for use with the small sample volumes required for LOC applications. The detection of standard targets of Li, K, Na, and Ca is characterized and found to have detection levels in the 10-100 nM regime. The system is coupled with an electrothermal source that allows selective desorption of species, partially solving the spectral overlap problem and allowing the analysis of larger dilute samples. Ultimately the system demonstrates comparable performance to commercial non-oxygen assisted systems. Although not integrated, an infrastructure was developed for coupling with LOC. Future work with an oxygen assist and LOC integration might fully address most barriers to the use of FAES in important applications. Although the hardware is designed to be integrated in order to offer a joint LOC POC diagnostic instrument with an ETV-FAES, this thesis focuses primarily on the ETV-FAES and its development, characterization, and limitations.