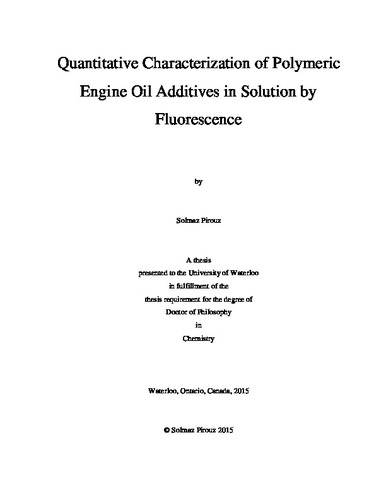 The solution behavior of several polymeric oil additives has been characterized by using fluorescence. First, the chemical composition of the polyisobutylene-based dispersants was determined by using the inherent fluorescence of the succinimide moiety of the polyisobutylene succinimide (PIBSI) dispersants and its efficient quenching by secondary amines. A series of PIBSI dispersants were synthesized by reacting one molar equivalent (meq) of polyisobutylene succinic anhydride (PIBSA) with two meqs of hexamethylenediamine, diethylenetriamine, triethylenetetramine, tetraethylenepentamine, and pentaethylenehexamine to yield the corresponding bis-PIBSI (b-PIBSI) dispersants. Intermolecular association of the dispersants in the solid state or in solution prevented the determination of the chemical composition of the b-PIBSI dispersants with traditional methods such as 1H NMR and FTIR. Therefore, two procedures were developed to estimate the amine content of the b-PIBSI dispersants based on gel permeation chromatography (GPC) and fluorescence quenching. The fluorescence study showed a decrease in the fluorescence of the succinimide groups with increasing number of secondary amines present in the polyamine linker. A similar method was then applied to determine the level of modification of the b-PIBSI dispersants after they were reacted with ethylene carbonate (EC) to generate modified b-PIBSI dispersants (Mb-PIBSI). The fact that the succinimide fluorescence of the Mb-PIBSI dispersants was quenched much more efficiently by secondary amines than by the urethane groups that resulted from the EC modification of the amines was employed to quantify the level of EC modification of the Mb-PIBSI dispersants. Moreover fluorescence was used to determine and compare the binding isotherms of a series of b-PIBSI and Mb-PIBSI dispersants as they adsorbed onto the surface of carbon black particles. Second, the molar fraction of intermolecular associations (finter) between ethylene-propylene (EP) copolymers was quantitatively determined by using pyrene excimer formation. In these experiments, a series of EP copolymers was maleated to yield EP-MA and then fluorescently labeled with 1-pyrenemethylamine and 2-(2-naphthyl)ethylamine to yield Py-EP and Np-EP, respectively. Fluorescence resonance energy transfer (FRET) experiments between Np-EP and Py-EP provided qualitative evidence of the existence of intermolecular association. A quantitative measure of finter was obtained by measuring the fluorescence intensity ratio of excimer-to-monomer (IE/IM) of the Py-EP solutions. The results showed that finter remained constant for amorphous Py-EP samples and increased for semicrystalline Py-EP samples upon decreasing the temperature as would have been expected from their chemical composition. This method was then applied to quantitatively measure finter between EP copolymers in solution in the presence of wax typically found in engine oils. The solution behaviour of four Py-EP copolymers in the presence of wax was characterized. The results showed that the interaction of wax with ethylene sequences in the EP copolymers increased macromolecular associations in solution as reflected by an increase in finter. In the case of the semicrystalline samples at lower temperatures, however, the formation of microcrystals induced strong polymer-polymer interactions that resulted in the formation of microcrystals and the dissociation of the wax from the polymers. Together the results presented in this thesis suggest that fluorescence provides reliable information on the chemical composition and behaviour of polymeric oil additives, an information that was otherwise difficult to extract from traditional characterization methods.