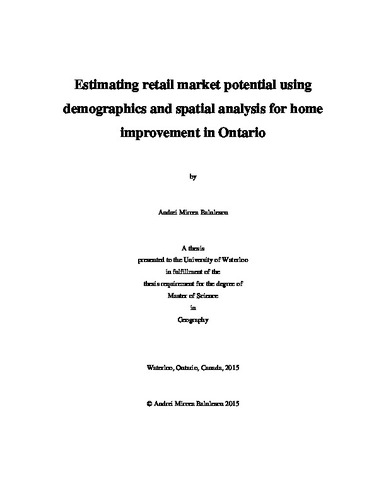 Alongside the breadth of literature on retail location theory, retail market assessment, and consumer analysis, two major topics are addressed. First, a framework for estimating market demand spatially using consumer expenditures for retail is put forward. This is a foremost step in identifying suitable locations for retail stores, as it gives an indication into the power of the market at the location. Coupled with reported retail sales, the approach evaluates what proportion of the market share remains for capture. Benchmarking the aggregate estimated market expenditures against provincially reported sales reveals that the estimation performance of one method is within one percent of the provincial sales. Spatial analysis results for Ontario show that market demand for home improvement is clustered in Census Metropolitan Areas, where 90% of the provincial expenditures are located. A regression analysis identified three demographic variables as drivers of home improvement expenditures: count of households with income over $100,000, average monthly shelter costs for owned dwellings, and count of owned dwellings. The market demand estimation is necessary for profitability analyses, site suitability analyses and gravity modelling. Such a framework for market demand estimation can be used by retailers and local governments to inform policy creation for future development. The second topic addressed by this thesis was the characterization of situational and demographic variables contained in the service areas of home improvement chain stores. The characterization facilitated a statistical comparison between chains to identify similarities and differences in store formats and demographics. Results showed that big-box chains are fairly similar in their situational characteristics and statistically significant similarities were observed when comparing the demographic variables contained in the service areas of these chains’ stores. Chains that employ various store formats exhibit statistically significant differences both in situational and demographic characteristics. The spatial distribution of the chain stores was assessed using spatial statistics and showed that the chains exhibited different spatial patterns in Ontario. Store level sales were estimated using a mathematical model that employed store area and demographics. Future work on chain characterization using more demographic categories would allow for the segmentation of target markets and the characterization of the landscape for optimal retail locations.