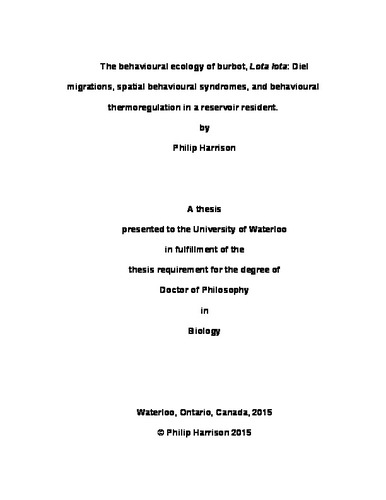 While the impacts of hydropower development on diadromous and riverine fish species have received considerable attention, the ecology and behaviour of fish species residing in hydropower reservoirs is not well understood. As a winter-specialist species, commonly found in hydropower impoundments in North America, burbot, Lota lota, provide a useful model species to test hypotheses regarding reservoir resident ecology and behaviour. In this thesis, 3 empirical studies were used to investigate the behavioural ecology of burbot residing in Kinbasket Reservoir, British Columbia, Canada. Hypotheses regarding diel differences in depth use, individual differences in space use, and seasonal and diel differences in thermal habitat selection, were tested using biotelemetry and mixed effects modelling frameworks. In Chapter 2, results indicated adult burbot performed a diel migration into shallow water at night. Further, the size structured nightly depth distributions, seasonal diel differences in thermal habitat use, and elevated nightly activity observed, suggested the adaptive significance of this migration was best explained by a trade-off among foraging opportunity, bionenergetics advantage, and predation avoidance. In Chapter 3, burbot spatial behavioural traits were identified as personality dependent, with significant repeatability detected in home range, movement, site-fidelity, rate of vertical movement and dispersal from release. Further, home range, movement and site fidelity were correlated at the between individual level, indicating a spatial behavioural syndrome. In Chapter 4, results showed nightly selection by burbot for 8-10°C during the pre-spawn period, 0-2°C during the spawning period, and for 12-14°C during the summer, indicating that selection occurs outside the summer period and differs between seasons and diel periods. The results of the three data chapters provided the first empirical documentation of several interesting species-specific behavioural patterns, including; diel migrations, spatial behavioural syndromes, and seasonal and diel shifts in thermal habitat selection, in adult burbot. Further at broader ecological scales, these data chapters provided: a significant contribution to the general understanding of the ultimate causes of diel migrations, important advances in the understanding of the role of animal personality in shaping spatial ecology, and considerable progress towards an improved understanding of the temporal dynamics of thermal habitat selection. Combined, these findings emphasise the importance of conservation of benthic diel migrating species for lake and reservoir ecosystem integrity, suggest that conservation policy based on mean measures of space use may not adequately capture the space use requirements of populations, and highlight the vulnerability of winter specialist species to increased winter temperatures. In North America, hydropower has been hypothesised as contributing to the decline of burbot populations and a need for a broad synthesis of existing knowledge regarding burbot and hydropower, was identified. Accordingly, a review of scientific literature regarding the benefits and threats of hydropower to burbot populations, was undertaken in Chapter 5. The synthesis provided important clarity regarding the relationship between burbot and hydropower, suggesting that while winter discharge routines may threaten downstream burbot populations, reservoir habitats can provide suitable thermal and trophic niches for the stenothermic, predatory burbot. Furthermore, while turbine entrainment has been hypothesised as a possible factor in burbot declines, the synthesis and traits based approach used, indicated overall population level risk from entrainment was low and resulted in a recommendation for research into the ability of juvenile entrained fish to contribute to downstream recruitment. Together, the findings of this thesis have made an important contribution to knowledge regarding: the behavioural ecology of burbot, the relationship between hydropower and burbot ecology and the behavioural ecology of fish in general. Furthermore, this thesis has provided a detailed account of the relevance of these findings to both burbot-specific and wider conservation management and policy. Finally, this thesis has identified several interesting topics for future research which include: the role of animal personality in partial diel migrations, the ability of physiological and behavioural correlates to predict spatial behavioural syndromes a priori, the fitness consequences of thermal habitat selection, and the impacts of hydropower on population connectivity of a fascinating winter-specialist diel-migrating species.