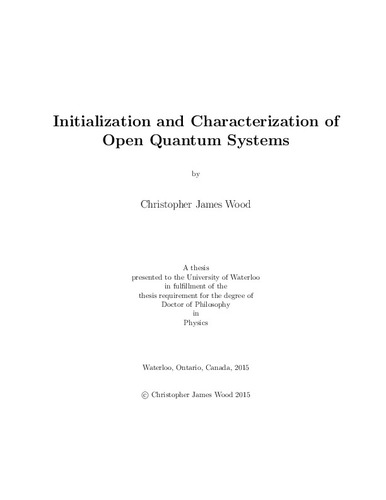 In this thesis we address three topics of open quantum systems theory. The first concerns the operational characterization of an open quantum system. We develop a graphical calculus for open quantum systems and use it to review the operational representation and characterization of noisy evolution using completely-positive maps, or quantum channels. These graphical techniques facilitate an intuitive unification of the various representations of CP-maps, and the transformations between these representations. We generalize the channel formalism by introducing quantum superchannels --- effective quantum channels which take another channel as input. Superchannels may be constructed using graphical techniques to rearrange the tensor network for a sequence of channels, and these constructions allow for the description of a strictly greater set of dynamics than is possible with the standard formalism. We demonstrate this by providing a method for the complete characterization of an open system initially correlated with its environment. In doing so we introduce and develop several novel quantitative measures for characterizing the strength and presence of initial correlations in a quantum system. These techniques may be implemented using measurement of the system alone, and do not require any access or prior knowledge about the environment. The second topic we discuss is the parallel initialization of an ensemble quantum system into a high purity state. We describe a dissipative state engineering technique where an ensemble of identical spins may be prepared in its ground state by coupling the spins to the resolved sidebands of a high-Q resonator. This allows for parallel removal of entropy from a large number of quantum systems, enabling an ensemble to achieve a polarization greater than thermal equilibrium, and in principle on a time scale much shorter than thermal relaxation processes. This is achieved by the collective enhancement in coupling strength of the coupled angular momentum subspaces which behave as larger effective spins. Cavity cooling is shown to cool each of these subspaces to their respective ground state, however by including a local $T_2$ dephasing dissipator on each spin we show how one may use this to break the identical spin degeneracy and couple the subspaces to enable cooling to the full ground state of the joint system. The third topic concerns quantum correlations between the momentum and spin subsystems of a neutron in a neutron interferometer. We explore the robustness of these correlations in the presence of dephasing noise due to randomized phase differences between interferometer paths. We demonstrate that even in the presence of strong noise quantum correlations persist and can be detected by introducing post-selected spin measurements at the output of the interferometer. We relate these post-selected experiments to which-way measurements and a quantum eraser.