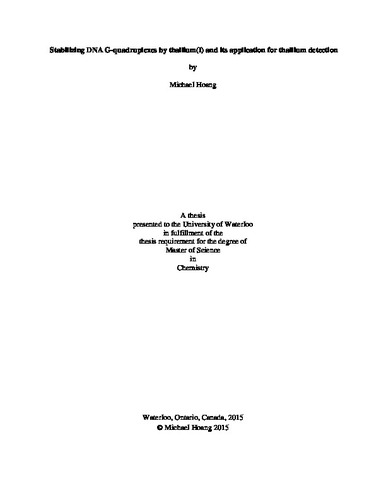 Heavy metals such as thallium are dangerous to living organisms and the environment. They are toxic and harmful. The threat of pollution from these metals is ever growing due to increased mining around the world. Thallium is found between mercury and lead in the periodic table. Thallium is considered more toxic than either of these elements. A reason why thallium is so dangerous is because many biological recognition sites are unable to distinguish it from potassium, a critical metal in biology. Conventional methods to detect thallium ions in the environment have their own disadvantages, including being labour intensive, time consuming, and difficult to perform on site, real time, high frequency monitoring. Therefore, it is highly desirable to have selective biosensors for thallium detection. DNA aptamers are single-stranded DNA molecules that have the ability to bind towards certain targets with high affinity and selectivity. Some DNA aptamers are able to morph into G-quadruplex structures upon binding with certain metal ions. They are attractive for this project because they tend to bind to K+ with great affinity, an ion similar to Tl+. By utilizing this property, we hypothesize that new Tl+ biosensors could be developed. For this project DNA aptamer biosensor designs relying on the G-quadruplex conformation were developed. These included the Förster resonance energy transfer (FRET) based, and the colorimetric based sensors. The FRET based sensor utilizes one fluorophore dye on each end of the DNA aptamer. Upon binding to the target in a G-quadruplex conformation, the two ends might approach each other, depending on the DNA sequence. A total of nine fluorescently labelled DNA sequences were screened with the PS2.M DNA found to have the highest sensitivity towards Tl+. The decreased distance between the two dyes shifts the dominant wavelength of emission. Using this technique a dynamic range of up to 1 mM Tl+, a linear range between 0 - 300 µM Tl+, and a limit of detection (LOD) of 59 µM Tl+ were determined. The sensor was tested for its Tl+ sensing ability in the presence of over ten times the amount of alkali ions with little interference effect, demonstrating the higher binding affinity of Tl+. This sensor was sensitive enough to detect Tl+ in spiked Lake Ontario water samples. The FRET based sensors demonstrated the feasibility of using PS2.M for thallium detection. A drawback to this method is the expense involved in labelling the DNA probe, and the need for a fluorometer for detection. For these reasons a colorimetric sensor was designed. The colorimetric sensor design is based on the interactions of gold nanoparticles (Au NPs), and single stranded DNA (ssDNA). In the absence of the Tl+, the flexible ssDNA adsorbs on the surface of Au NPs. Upon the addition of a highly concentrated salt solution, the Au NPs would be protected from aggregation. In the presence of Tl+ the DNA is folded, inhibiting adsorption on to the Au NPs. The dynamic range of this system appeared to be 1.3 - 80 µM Tl+, with a linear range of 1.3 - 20 µM Tl+, 13.61 units/ mM of Tl+, and a LOD of 4.56 µM Tl+. The selectivity of Tl+ over K+ was similar to what was found in the FRET based sensor. After exploring the analytical aspect of this system, the fundamental chemical interactions were also studied. Since the hypothesized mechanism for Tl+ detection for these sensor designs rely on the G-quadruplex aptamer conformation circular dichroism (CD) is a useful technique. CD uses circularly polarized light to measure the chirality of the aptamer-analyte structure. Using this technique we directly analyzed the structural changes of the aptamers in the presence of Tl+, and alkali ions. This analysis revealed characteristic absorbance peaks for antiparallel G-quadruplex structures when in the presence of Tl+ and K+ ions. Isothermal titration calorimetry measures the enthalpy of a reaction. Binding reactions often result in exothermic or endothermic effects. Using this analysis technique, a direct measure of binding is possible. From these experiments, the amount of heat released was small. Despite this it was clear that Tl+ had the highest enthalpy change, supporting the high selectivity for Tl+. In summary, a highly selective probe for Tl+ was identified in this thesis work. Its application in making biosensors and its fundamental binding interactions with Tl+ have been studied.