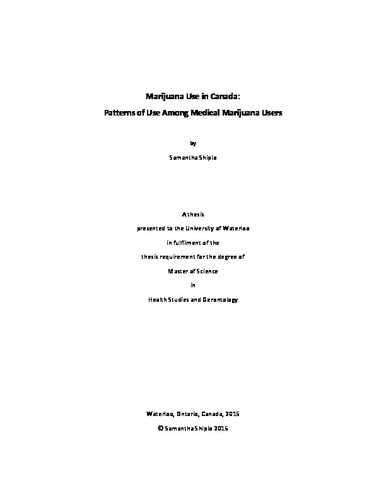 Research evidence supports the use of marijuana for the purpose of relieving medical symptoms and, therefore, the Canadian courts granted Canadians legal access to marijuana for medical purposes. More than 40,000 Canadians are currently approved to use medical marijuana, with an additional 400,000 Canadians reporting use of marijuana for medical purposes. During the study period, Marihuana for Medical Purposes Regulations (MMPR) was the medical marijuana regulation in effect in Canada, which allowed patients with a medical document from a physician to purchase dried marijuana from a Health Canada licensed producer. Medical marijuana regulations infer how medical marijuana is to be accessed and used. The mode of delivery—whether marijuana is smoked, vapourized, or consumed—may have important implications for potential therapeutic efficacy, as well as health risks. Anecdotal evidence suggests that the use of alternative and innovative modes of delivery is on the rise; however, there is very little evidence on current patterns of use among Canadian medical marijuana users, particularly with respect to modes of delivery. The primary objective of the current research was to examine patterns of use among Canadians using marijuana for medical purposes. The study had five specific aims: 1) To estimate the prevalence of different modes of delivery, 2) To examine perceptions and importance of various factors for different modes of delivery, 3) To estimate the prevalence of different forms of marijuana, 4) To examine the reasons for using different forms of marijuana, and 5) To assess prevalence and perceptions of different sources for obtaining medical marijuana. An overall sample of 364 approved adult Canadian medical marijuana users completed an online cross-sectional survey between April 29 and June 8, 2015. Participants were recruited through a convenience sample from Health Canada licensed producers. Nine Health Canada licensed producers from across Canada helped recruit participants mainly through email. The results showed that using a vapourizer was the most popular mode of delivery currently used (53%), even more so than smoking a joint (47%), indicating a possible increase in the use of vapourizers among approved medical users since the introduction of the MMPR. The main reason participants reported using a vapourizer was to reduce negative health consequences associated with smoking. Furthermore, current use of a vapourizer was associated with fewer respiratory symptoms (OR=1.28, 95%CI: 1.05-1.56, p=0.01) supporting that the use of vapourizers may be less harmful than smoking. Overall, 75% of participants reported using dried herb due to it’s easy accessibility, as it was the only legal form of marijuana available for purchase from licensed producers. It is important to note that accessibility of the forms of marijuana may change due to the recent revision to the MMPR allowing alternative forms of marijuana, in addition to dried herb, to be sold by licensed producers. Licensed producers, as the only legal source for obtaining medical marijuana at the time, was preferred by most approved users (44%). However, the city of Vancouver did not agree that licensed producers were a sufficient source for obtaining medical marijuana, thus, against federal medical marijuana law, decided to allow dispensaries and clubs to sell marijuana. Monitoring implications of such current and future changes to medical marijuana regulations may be beneficial to policymakers. Specifically, continuing to monitor and track medical marijuana use trends in terms of modes, forms, and sources in light of the present data. Overall, the current study addressed an important evidence gap on patterns of medical marijuana use in Canada following the introduction of the MMPR as it is critical to understand the population of medical users in order to inform marijuana policy.

Samantha Shiplo (2015). Marijuana Use in Canada: Patterns of Use Among Medical Marijuana Users. UWSpace. http://hdl.handle.net/10012/9551