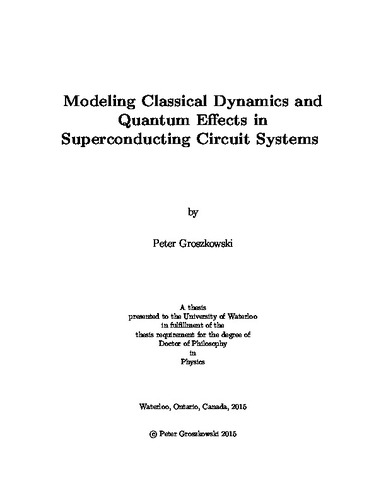 In recent years, superconducting circuits have come to the forefront of certain areas of physics. They have shown to be particularly useful in research related to quantum computing and information, as well as fundamental physics. This is largely because they provide a very flexible way to implement complicated quantum systems that can be relatively easily manipulated and measured. In this thesis we look at three different applications where superconducting circuits play a central role, and explore their classical and quantum dynamics and behavior. The first part consists of studying the Casimir [Proc. K. Ned. Akad. Wet (1948)] and Casimir-Polder like [Physical Review 73, 4 (1948)]effects. These effects have been discovered in 1948 and show that under certain conditions, vacuum field fluctuations can mediate forces between neutral objects. In our work, we analyze analogous behavior in a superconducting system which consists of a stripline cavity with a DC-SQUID on one of its boundaries, as well as, in a Casimir-Polder case, a charge qubit coupled to the field of the cavity. Instead of a force, in the system considered here, we show that the Casimir and Casimir-Polder like effects are mediated through a circulating current around the loop of the boundary DC-SQUID. Using detailed analysis, we examine how the values of these currents change as we vary different physical circuit parameters. We show that for the set of physical parameters that can be easily obtained experimentally, the Casimir and Casimir-Polder currents can be of the order of 10^(-8) A and 10^(-13) A respectively. In the second part, we theoretically model an experiment which was performed by Britton Plourde's group at Syracuse University, and which studied the transient dynamics of a nonlinear superconducting oscillator, based on a capacitively shunted DC-SQUID. Such DC-SQUID oscillators are used in many areas of physics and engineering, for example, as building blocks of amplifiers or qubits, qubit couplers, or as sensitive magnetic field detectors. In many of these situations, their steady state behavior is often considered, while in the experiment performed at Syracuse, of specific interest, was the response of a DC-SQUID oscillator to a short radiation that only briefly excited the system. In this thesis, we simulate this response at the experimental temperature, by numerically solving a set of classical stochastic differential equations that mimic the behavior of the circuit. This is done for different settings of the flux that is threaded through the DC-SQUID as well as different input pulse amplitudes. Furthermore, we briefly outline just how these kinds of brief excitations could be useful when applied in flux measurement protocols. We find that our simulations show good agreement with the experimentally obtained data. The final part considered in this thesis, looks at the dynamics of a qubit coupled to a measuring probe, which is modeled as a harmonic oscillator. An example superconducting circuit, that could be used to implement such a setup, consists of a flux qubit inductively coupled to a DC-SQUID. This measurement scenario has already been explored in [Phys. Rev. B 78, 5 (2008)], but there, the authors only consider very short interaction times between the DC-SQUID and the qubit. Here, in contrast, we concentrate our efforts on studying the evolution of qubit as the measurement takes place, by solving the corresponding Lindblad master equation, but over longer measurement times. This is done by calculating the measurement induced dephasing rate of the qubit, as well as, discussing its sometimes present effective relaxation, in regimes where the measurement is considered to not be quantum non-demolition (QND). Finally, we briefly explore how well a potentially complicated evolution of the qubit can be approximated as a very simple Kraus map.