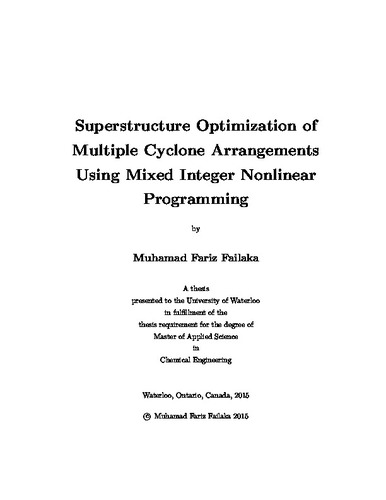 The gas-solid cyclone has been remarkably widely used among all types of industrial gas-cleaning devices. Many studies have been conducted and reported excessive experimental, theoretical, and computational research aimed at understanding and predicting the performance of cyclones. However, the majority of these works have only focused on the development of single cyclones. In the meantime, the use of multiple cyclones can be considered as one solution to the demands of obtaining the best pollution control strategies to achieve a minimum level of pollution reduction. This has motivated the development of effective formulation for the cyclone arrangement problem. In this work a new optimization model of multiple cyclone arrangement is presented. The key idea is to present the capability of General Algebraic Modeling System (GAMS) software in obtaining the optimal number and dimensions of the cyclone, and the best cyclone arrangement for a certain condition with respect to the minimum total cost, including the operating cost and the capital cost. The proposed model of nonlinear programming (NLP) and mixed integer nonlinear programming (MINLP) has been successfully applied to different case studies. The NLP model is applied to an NPK (Nitrogen, Phosphorus, and Potassium) fertilizer plant to find the optimal number and dimensions of the 1D3D, 2D2D, and 1D2D cyclones arranged either in parallel or series. In another case study with the total flow rate of 165 m3/s of a stream to be processed in a paper mill, the best cyclone arrangement of parallel-series for three different combinations of the 1D3D and 2D2D cyclone is obtained through the use of MINLP modeling. The results show that different types of cyclones, applied in NPK fertilizer plant, result in different optimal numbers of cyclones. Each type of cyclone (i.e., 1D3D, 2D2D, and 1D2D) has an alternative that can be arranged either in parallel or in series configuration. Furthermore, different values used for the upper bound of D and N in the proposed MINLP model, result in a different cyclone arrangement of parallel-series selected as the optimal solution. The cyclone of 2D2D+2D2D arranged in parallel-series is found to be more economical and efficient compared to other arrangements.