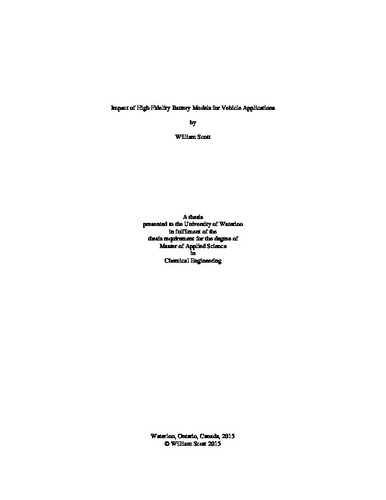 Automotive battery models, compared with personal electronics, are more complex as they experience a larger range of current discharge/charge rates. Electronics have a constant power demand, and thus a constant current is demanded from the battery. Vehicles have fluctuating power demands, dependent on the acceleration rate, and thus a non-constant current is demanded. There are many different classifications of automotive battery models depending on the fidelity required. Most automotive battery models can be attributed to one of two classifications: electrochemical and equivalent circuit, although there are some exceptions (e.g. neural network, linear, etc.). Electrochemical models incorporate individual particle interactions with great detail, resulting in high accuracy and simulation time. It follows that electrochemical models are frequently used in the design of new battery technologies. In a contrast equivalent circuit models (ECMs) simplify complex chemical interactions as circuit components consisting of limited parameters, trading model accuracy for speed and computational simplicity. Equivalent circuit models are frequently used when the battery is a component of a larger comprehensive model or when real-time convergence is essential. For this reason, equivalent circuit models are the preferred model for vehicle simulation, design, and control systems. The internal resistance (Rint) equivalent circuit model is currently dominant within the literature. Consisting of a single parameter (Rint), the Rint model is easy to characterize and implement. This model is often expanded by expressing the resistance as a function of temperature and relative capacity (i.e. state of charge or SOC), as well as current direction. This model can be found in industrial vehicle modeling software such as Autonomie. However the Rint model does not capture the nature of the battery voltage response which displays a hysteresis, or time lagged, effect. This effect includes, but is not limited to, faradic charge-transfer resistance (SEI interface), double-layer capacitance, lithium-ion diffusion, or kinetic faradic impedance. The Thevenin equivalent circuit model accounts for this effect by introducing two additional parameters, a resistor and capacitor (R2 and C1) in parallel, in series with the internal resistance (Rint). This adaptation allows the model to capture the hysteresis effect, as the voltage across the secondary resistor (R2) is a function of the energy stored within the capacitor (C1). It has been shown that, despite its simplicity, the Thevenin model displays a large improvement in prediction accuracy relative to the Rint model. In this work the impact of the hysteresis effect, and need for higher fidelity battery models, is investigated. To this end, the Rint and Thevenin models are characterized with the hybrid pulse power characterization (HPPC) test scaled to the current demands exhibited in the UDDS and US06 drive cycles using a LiFePO4 battery. The characterized models are then validated with the measured battery voltage response to simulated UDDS and US06 drive cycle representative current profiles. The two models are then compared across the US06, HWFET, and UDDS drive cycles in Autonomie software. The model simulation results, expressed in terms of electrical consumption (Wh mi-1), are given context with reference to 2014 commercial electrified vehicles.