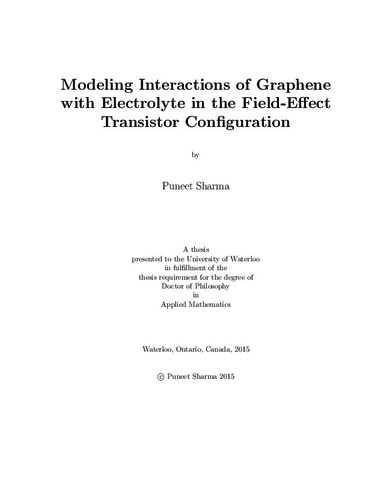 Understanding interactions of graphene with an electrolyte is fundamental to its applications for chemical and biological sensors, where graphene operates in the configuration of a field-effect transistor with its surface exposed to liquid containing mobile ions. By applying a gate potential through an electrolyte one may achieve a control of graphene’s conductivity that is extremely sensitive to the presence of adsorbed molecules, ion concentration, or the pH in an aqueous solution. In addition, charged impurities in the oxide layer underneath graphene also affect its conductivity by causing fluctuations of the scattering potential for charge carriers in graphene. Since the gate potential used for graphene doping in such applications is usually large, it is necessary to consider nonlinear effects in the equilibrium doping of graphene using a full density of states for its π-electron bands, while in the electrolyte it is necessary to assess the effects due to finite size of ions and dielectric saturation of water near highly doped graphene. We first explore the capacitance of a graphene-electrolyte interface using well established continuum models from electrochemistry that generalize the Poisson-Boltzmann (PB) theory: the Bikerman model for steric effects due to ion size and the Booth model for dielectric saturation. Next, we develop a model to describe the screening of the electrostatic potential that arises in the plane of graphene due to charged impurities in the oxide. For the polarizability of charge carriers in graphene we explore two models, one based on the Thomas-Fermi approximation and the other based on the Random Phase approximation for graphene’s π-electron bands in the Dirac cone approximation. On the other hand, the ion distribution in the electrolyte is described by a fully linearized PB model known as Debye-Hückel PB (DHPB) model, which is suitable for a low gating potential, as well as by a partially linearized PB (PLPB) model, which contains full information on the equilibrium gating conditions of graphene. The screened potential due to charged impurities is described by a dielectric response formulation of the problem, which is derived from the Green’s function for the Poisson equation for the entire structure containing graphene. Statistical properties of the fluctuations in the potential are analyzed by means of its autocorrelation function, which is expressed in terms of a structure factor for the geometric positions of charged impurities in the oxide. We have found that for the gate potentials up to ≈ 1 V, which are of interest in most graphene applications, the total capacitance is dominated by the quantum capacitance of graphene. Moreover, we have found that the capacitance of the electric double layer in the electrolyte may be adequately described for the same range of gate potentials up to ≈ 1 V by using the PB model in its standard, nonlinear form, without the need of additional modifications. Furthermore, we have confirmed that the PLPB model yields the doping density of graphene and the potential drop across the diffuse layer, with better accuracy and in a broader range of values of the external parameters than the DHPB model. We have found that both the DHPB and the PLPB models exhibit a very weak dependence on ion concentration for both the auto-correlation and variance of the potential when compared to the uncorrelated charged impurities. Last but not least, results reported in this thesis are geared towards the first stage of a long-term undertaking to develop a comprehensive and computational model for biological and chemical sensors in the context of graphene based field-effect transistors.