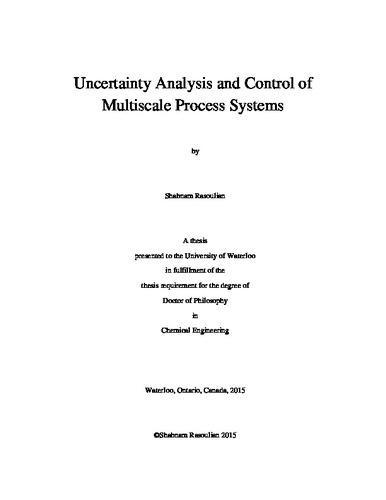 Microelectronic market imposes tight requirements upon thin film properties, including specific growth rate, surface roughness and thickness of the film. In the thin film deposition process, the microscopic events determine the configuration of the thin film surface while manipulating variables at the macroscopic level, such as bulk precursor mole fraction and substrate temperature, are essential to product quality. Despite the extensive body of research on control and optimization in this process, there is still a significant discrepancy between the expected performance and the actual yield that can be accomplished employing existing methodologies. This gap is mainly related to the complexities associated with the multiscale nature of the thin film deposition process, lack of practical online in-situ sensors at the fine-scale level, and uncertainties in the mechanisms and parameters of the system. The main goal of this research is developing robust control and optimization strategies for this process while uncertainty analysis is performed using power series expansion (PSE). The deposition process is a batch process where the measurements are available at the end of the batch; accordingly, optimization and control approaches that do not need to access online fine-scale measurements are required. In this research, offline optimization is performed to obtain the optimal temperature profile that results in specific product quality characteristics in the presence of model-plant mismatch. To provide a computationally tractable optimization, the sensitivities in PSEs are numerically evaluated using reduced-order lattices in the KMC models. A comparison between bounded and distributional parametric uncertainties has illustrated that inaccurate assumption for uncertainty description can lead to economic losses in the process. To accelerate the sensitivity analysis of the process, an algorithm has been presented to determine the upper and lower bounds on the outputs through distributions of the microscopic events. In this approach, the sensitivities in the series expansions of events are analytically evaluated. Current multiscale models are not available in closed-form and are computationally prohibitive for online applications. Thus, closed-form models have been developed in this research to predict the control objectives efficiently for online control applications in the presence of model-plant mismatch. The robust performance is quantified by estimates of the distributions of the controlled variables employing PSEs. Since these models can efficiently predict the controlled outputs, they can either be used as an estimator for feedback control purposes in the lack of sensors, or as a basis to design a nonlinear model predictive control (NMPC) framework. Although the recently introduced optical in-situ sensors have motivated the development of feedback control in the thin film deposition process, their application is still limited in practice. Thus, a multivariable robust estimator has been developed to estimate the surface roughness and growth rate based on the substrate temperature and bulk precursor mole fraction. To ensure that the control objective is met in the presence of model-plant mismatch, the robust estimator is designed such that it predicts the upper bound on the process output. The estimator is coupled with traditional feedback controllers to provide a robust feedback control in the lack of online measurements. In addition, a robust NMPC application for the thin film deposition process was developed. The NMPC makes use of closed-from models, which has been identified offline to predict the controlled outputs at a predefined specific probability. The shrinking horizon NMPC minimizes the final roughness, while satisfying the constraints on the control actions and film thickness at the end of the deposition process. Since the identification is performed for a fixed confidence level, hard constraints are defined for thin film properties. To improve the robust performance of NMPC using soft constraints, a closed-form model has been developed to estimate the first and second- order statistical moments of the thin film properties under uncertainty in the multiscale model parameters. Employing this model, the surface roughness and film thickness can be estimated at a desired probability limit during the deposition. Thus, an NMPC framework is devised that successfully minimizes the surface roughness at the end of the batch, while the film thickness meets a minimum specification at a desired probability. Therefore, the methods developed in this research enable accurate online control of the key properties of a multiscale system in the presence of model-plant mismatch.