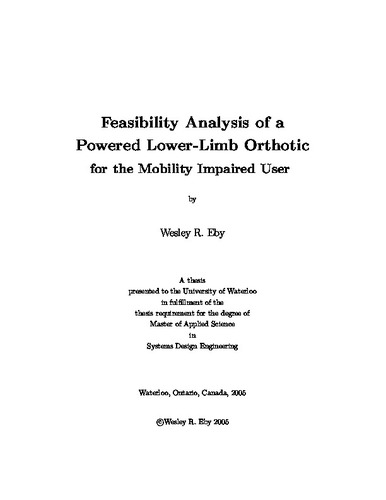 Powered orthotic devices can be used to restore mobility to the impaired user, and may thereby assist them in daily living tasks. An investigation is performed herein to examine the feasibility of a powered lower-limb orthotic in assisting the sit-to-stand task by 50% of the required torque. Feasibility is considered via simulation. A three-link sit-to-stand model, which is driven by kinematic data, is developed. Models of a Pneumatic Muscle Actuator and a DC motor are used to determine which of the two technologies can make a more appropriate contribution to the sit-to-stand task. Simulation revealed that both the Pneumatic Muscle Actuator and the DC motor are reasonable actuator choices, and neither limited the ability to achieve 50% torque assistance. The ability to assist the task was, however, limited by the ability to derive a control signal for the actuator from the user-orthotic interface. It was concluded that the user-orthotic interface requires further investigation. It was also found that while both actuator technologies are suitable for contributing 50% of the required torque, the Pneumatic Muscle Actuator is preferable due to its ability to scale to greater torques.