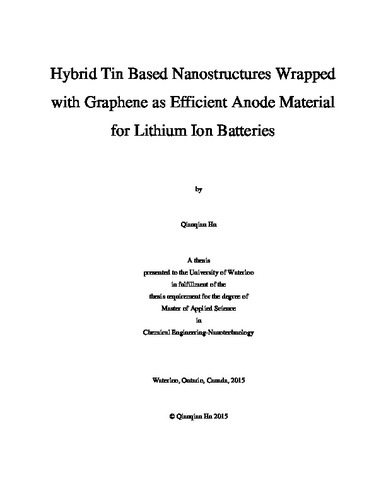 Recently, many developments in the electric & hybrid electric vehicles, and in the electronic devices, have resulted in an increasing demand for high power and high energy density lithium-ion batteries. The current commercial anodes based on graphite cannot meet the demand. Tin sulfide (theoretical specific capacity: 665 mAh/g) has been predicted as a potential anode material. However, its poor conductivity and large volume change during charge and discharge results in large irreversible capacity, leading to poor cycle performance. On the other hand, graphene has emerged as a new material with superior conductivity, good flexibility and extraordinary stability. In this work, we prepared tin sulfides with tuned morphology and composition which is supported by and wrapped with sulphur and nitrogen doped graphene (GSN). These nanostructures were prepared by solvothermal synthesis followed by controlled heat treatment. The as-synthesized material was found to be comprised of stannic sulfide (SnS2) crystals grown and wrapped with doped graphene. Interestingly, the SnS2 crystals are formed as ordered structure in the shape of hexagonal sheets. After that heat treatment the hexagonal nanosheets of SnS2 were transformed to rod-like structure with chemical transformation to stannous sulfide (SnS). In terms of electrochemical performance, both materials have first cycle charge/discharge capacities, which exceed the theoretical values. However, the heat treated material is more durable, which was able to maintain a charge capacity of ~ 870 mAh/g for more than 100 cycles at the rate of 0.1 A/g. At a high current density of 0.5 A/g, it can also keep 1500 cycles with a reversible capacity of ~ 550 mAh/g, which showed the longest cycle life among tin based materials reported in the literature. Inspection of the results reveals that tin sulfide/graphene based nanocomposites with improved energy densities and capacities than commercial graphite can make a significant impact on the development of new batteries for electric vehicles and portable electronics applications. Additionally, incorporating a binder into the electrode structure is vital to achieving practical lithium-ion battery performance, as it is used for improving stability. In this thesis, a new binder is introduced. Polyacrilonitrile(PAN) as a binder with no conductive additives is applied in as-prepared SnS2/G.After low temperature heat treatment which is beyond glass transition temperature, PAN physically rearranges the construction of the electrodes. It is advantageous for volume expansion with plasticity. Synergistic effects between doped graphene and PAN does contribution to significantly enhanced cycling durability. Also, a new mechanism for chemical reaction during charge/discharge is proposed due to the obtained twice higher capacity than the calculation based on traditional principle. In terms of cycling performance and rate capability, SnS2/G/PAN with low temperature heat treatment exhibits excellent results: there is a reversible capacity around 1200 mAh/g after 60 cycles without no obvious decrease in capacity from the initial cycle at the current density 0.1 A/g; after 150 cycles, at a higher current density of 0.25 A/g, the capacity is stable at 1000 mAh/g and the columbic efficiency is still 100%.