Does a High-Fat Diet Cause Inflammation in Female Rat Brain? 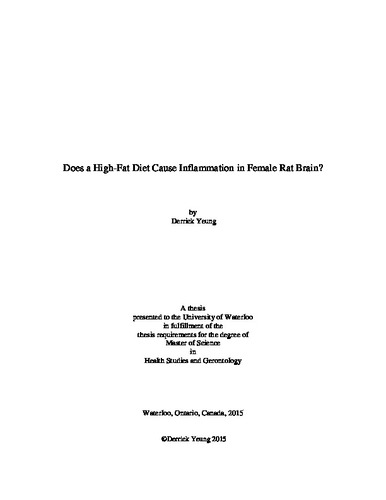 Obesity results from a disruption of normal energy homeostasis, and leads to a state of chronic low-grade inflammation. Given that inflammatory cytokines can disrupt synaptic activity and that obesity has been shown to cause cognitive impairment, I hypothesized that diet-induced obesity may cause an inflammatory response in regions of the brain important for learning and memory. Notably, previous diet-induced obesity studies have tended to focus on male animals, but sexual dimorphism in response to a high-fat diet (HFD) has been suggested; as a result, female rats were randomly assigned to either a control diet (CD; 10% kcal from fat), or a HFD (45% kcal from fat) at post-natal day 28. After 10 weeks, the hippocampus and pre-frontal cortex were extracted from each animal and homogenized. Immunoblotting was used to determine if a HFD affected levels of pro/anti-inflammatory cytokines, glial cells, and proteins involved in leptin signal transduction. A HFD was found to cause enhanced expression of anti-inflammatory IL-1ra in the prefrontal cortex, but no cytokine-related changes in the hippocampus (although levels of the leptin receptor and AKT/PKB were reduced in the hippocampus, but not the pre-frontal cortex). Although the data demonstrate that our protocol did not induce obvious proinflammatory changes, the possibility exists that the elevated IL-1ra levels reflect a compensatory response to an earlier period of inflammation caused by the HFD. Future work should expand on my current findings with the inclusion of male animals to allow for a direct sex comparison of the effects of the HFD. Our model could also be expanded with an immune challenge via lipopolysaccharide injection, or leptin stimulation in order to tease out potential differences not observed under basal conditions. Transgenerational effects should also be explored by examining the effects a maternal HFD may have on the expression of similar proteins in the offspring.