On the Control of Active End-nodes in the Smart Grid 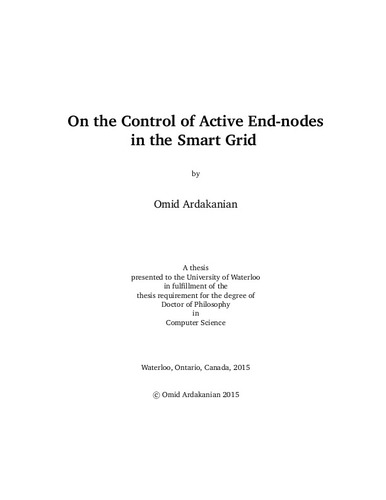 The electrical grid has substantially changed in recent years due to the integration of several disruptive load and generation technologies into low-voltage distribution networks, which are meant to smarten it and improve its efficiency. These technologies have subjected the grid to unprecedented amounts of variability and uncertainty that threaten its reliability and could reduce its efficiency. Even a low penetration of these disruptive technologies may cause equipment overloads, voltage deviations beyond permissible operating thresholds, and bidirectional power flows in distribution networks. The smart grid will comprise a vast number of active end-nodes, including electric vehicle chargers, solar inverters, storage systems, and other elastic loads, that can be quickly controlled to adjust their real and reactive power contributions. Given the availability of inexpensive measurement devices and a broadband communication network that connects measurement devices to controllers, it is possible to incorporate potentially disruptive technologies into distribution networks while maintaining service reliability, using some novel control mechanisms, which are the focus of this thesis. In this thesis, we propose a new paradigm for the control of active end-nodes at scale. This control paradigm relies on real-time measurements of the states of the distribution network and the end-nodes rather than long-term predictions. We use an optimal control framework to design mechanisms that balance a set of system-level and user-level objectives. We study control of active end-nodes in two different contexts: a radial distribution system and a grid-connected public electric vehicle charging station powered by on-site solar generation. We develop both a feedback controller and an open-loop controller, and propose centralized and distributed algorithms for solving optimal control problems. We implement and validate these control mechanisms using extensive numerical simulations and power flow analysis on a standard test system.