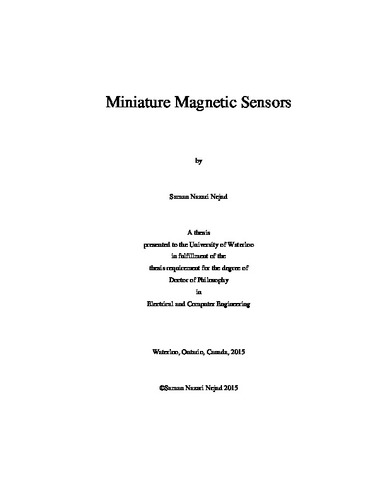 Magnetic sensors are widely used in nearly all engineering and industrial sectors, including high-density magnetic recording, navigation, target detection, anti-theft systems, non-destructive testing, magnetic labeling, space research, and bio-magnetic measurements in the human body. Miniature magnetic sensors with high sensitivity are particularly advantageous in biomedical and specialized industrial applications. Amongst the various extant magnetic sensors, Micro-Electro-Mechanical System (MEMS) and Giant Magneto impedance (GMI) sensors have the ability to sense low levels of magnetic field in the order of 10 millitesla as well as the space to be further miniaturized. In this thesis, MEMS and GMI sensors are studied in detail both theoretically and experimentally. Multiphysics analyses have been developed to provide a path to further investigate these two types of sensors for various sensor configurations. Several prototype units are successfully developed, fabricated and tested to verify the validity of these models. MEMS reed sensors consist of tri-layer beams of Au/Ni/Au. The actuation of these sensors is initiated by the magnetic force to maintain the continuity of magnetic field streamlines. The Ni layer is deployed as the main magnetic core, and the gold layers are used to enhance the contact quality of the switches. In this work, a unique fabrication process is developed that significantly reduces the number of masking and lithography steps. As well, a detailed finite element method is presented to study the behavior of these sensors and to optimize the device performance. The FEM study considers various magnetic environments, providing a performance map for the sensors. Having a performance map is essential for a system's operation and for tracking its operational behavior. The study also considers the effects of various device formations and packaging for these types of sensors. The generated magnetic force is observed to be much higher than the required mechanical force for device actuation. The GMI sensors exhibit many advantages over their conventional counterparts. In particular, thermal stability and high sensitivity make GMI sensors attractive candidates for a wide range of applications. The GMI sensors are based on concepts different from those for conventional giant magneto resistance (GMR) sensors. GMI sensors have been under active research only in the past decade. In this thesis, thin film multilayer GMI sensors are realized using microfabrication technology. The fabricated sensors are tri-layers of Co73Si12B15 /Au./ Co73Si12B15 The thin film GMI sensors are studied in detail using FEM simulation, and several sensors are developed, fabricated and tested to work in the millitesla range. A post-processing step is proposed to optimize the performance of GMI sensors and to enhance their magnetic sensitivity. The post-processing characterization shows that annealing the devices with a specific annealing cycle has the optimal effect of enhancing the magnetic characteristics of CoSiB. The sensors are treated with this post-processing recipe, demonstrating a considerable increase in their magneto impedance (MI) ratio. The research has made a contribution to establishing the engineering foundation toward the development of low-cost miniature GMI magnetic sensors for low field intensity applications.