Investigations on the action mode of Bacillus thuringiensis Cyt2Aa1 toxin 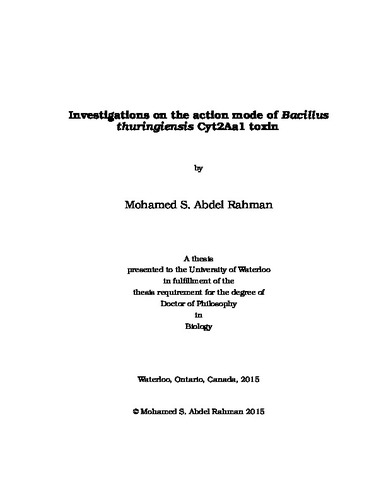 B. thuringiensis is a Gram-positive bacterium that, while quite otherwise closely related to the soil saprophyte Bacillus cereus, is unique in producing a large variety of membrane-damaging, insecticidal protein toxins. These toxins, which are widely used as biopesticides, fall into two major structural families, named Cry and Cyt. This thesis reports experiments that characterize the activity and membrane specificity of Cyt2Aa1 toxin, which is a member of the Cyt family. This toxin is shown to have a low degree of antibacterial activity against Gram-positive bacteria; the growth of the model organism Bacillus megaterium is inhibited in the presence of approximately 700 μg/mL of the toxin. The toxin readily binds to the bacterial cell surface, and marker release experiments show that the bactericidal effect arises through permeabilization of the bacterial membrane. In contrast, the Gram-negative organism E. coli is not inhibited by Cyt2Aa1, and the toxin fails to bind to the bacterial cells. Furthermore, it is shown that the cytolytic activity of the toxin is inhibited by cholesterol. The extent of inhibition is greater on model liposomes, in which virtually complete suppression is observed above a molar fraction of 20% or greater of cholesterol, than with red blood cells that were subjected to partial cholesterol extraction with methyl- β- cyclodextrin. Since cholesterol inhibits rather than activates Cyt2Aa1, its absence from bacterial membranes does not account for the low susceptibility of bacterial cells to the toxin. In previous studies, two different mechanisms have been proposed for the permeabilization of membranes by Cyt2Aa1, namely, the formation of discrete, oligomeric transmembrane pores, and the diffuse disruption of the target membrane in a detergent-like manner. A series of experiments that used both wild-type toxin and several point mutants with impaired hemolytic activity provides evidence for the formation of toxin oligomers that precedes the permeabilization of the target membrane. Moreover, osmotic protection experiments with polyethyleneglycol suggest the formation of pores with limited, but possibly heterogeneous size. Collectively, these findings support the notion that Cyt2Aa1 acts through the formation of discrete oligomeric pores.