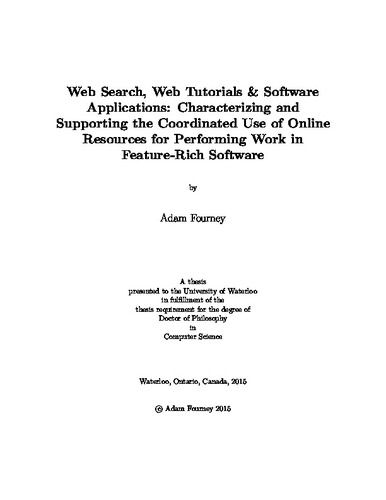 Web search and other online resources serve an integral role in how people learn and use feature-rich software (e.g., Adobe Photoshop) on a daily basis. Users depend on web resources both as a first line of technical support, and as a means for coping with system complexity. For example, people rely on web resources to learn new tasks, to troubleshoot problems, or to remind themselves of key task details. When users rely on web resources to support their work, their interactions are distributed over three user environments: (1) the search engine, (2) retrieved documents, and (3) the application's user interface. As users interact with these environments, their actions generate a rich set of signals that characterize how the population thinks about and uses software systems "in the wild," on a day-to-day basis. This dissertation presents three works that successively connect and associate signals and artifacts across these environments, thereby generating novel insights about users and their tasks, and enabling powerful new end-user tools and services. These three projects are as follows: Characterizing usability through search (CUTS): The CUTS system demonstrates that aggregate logs of web search queries can be leveraged to identify common tasks and potential usability problems faced by the users of any publicly available interactive system. For example, in 2011 I examined query data for the Firefox web browser. Automated analysis uncovered approximately 150 variations of the query "Firefox how to get the menu bar back", with queries issued once every 32 minutes on average. Notably, this analysis did not depend on direct access to query logs. Instead, query suggestions services and online advertising valuations were leveraged to approximate aggregate query data. Nevertheless, these data proved to be timely, to have a high degree of ecological validity, and to be arguably less prone to self-selection bias than data gathered via traditional usability methods. Query-feature graphs (QF-Graphs): Query-feature graphs are structures that map high-level descriptions of a user's goals to the specific features and commands relevant to achieving those goals in software. QF-graphs address an important instance of the more general vocabulary mismatch problem. For example, users of the GIMP photo manipulation software often want to "make a picture black and white", and fail to recognize the relevance of the applicable commands, which include: "desaturate", and "channel mixer". The key insights for building QF-graphs are that: (1) queries concisely express the user's goal in the user's own words, and (2) retrieved tutorials likely include both query terms, as well as terminology from the application's interface (e.g., the names of commands). QF-graphs are generated by mining these co-occurrences across thousands of query-tutorial pairings. InterTwine: InterTwine explores interaction possibilities that arise when software applications, web search, and online support materials are directly integrated into a single productivity system. With InterTwine, actions in the web browser directly impact how information is presented in a software application, and vice versa. For example, when a user opens a web tutorial in their browser, the application's menus and tooltips are updated to highlight the commands mentioned therein. These embellishments are designed to help users orient themselves after switching between the web browser and the application. InterTwine also augments web search results to include details of past application use. Search snippets gain before and after pictures and other metadata detailing how the user's personal work document evolved the last time they visited the page. This feature was motivated by the observation that existing mechanisms (e.g., highlighting visited links) are often insufficient for recalling which resources were previously helpful vs. unhelpful for accomplishing a task. Finally, the dissertation concludes with a discussion of the advantages, limitations and challenges of this research, and presents an outline for future work.