The hydrological interactions within a mine impacted peatland, James Bay Lowland, Canada 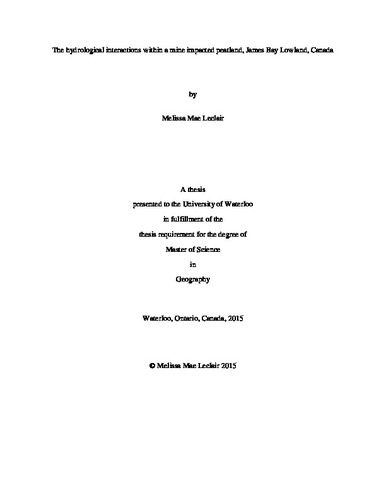 The development of a large open-pit diamond mine in the James Bay Lowland, one of the world’s largest wetland complexes, provides insight into hydrological processes that sustain wetlands in the region. The bog and fen peatlands that dominate the landscape have developed as a consequence of the low relief and low hydraulic conductivity of the underlying marine sediments that restrict percolation. The peatlands and marine sediments overlie permeable Silurian limestone into which the mine-pit extends. Percolation losses (between 2009–2011) from the peatlands have been enhanced due to depressurization of the limestone aquifer caused by mine dewatering, experiencing rates of up to 15 mm day-1. This is more than an order of magnitude higher than rates measured at a nearby non-impacted site, representative of the pre-mining condition. Large percolation losses were also measured in fen systems, which are typically local discharge zones. Where water tables were lowered by enhanced percolation losses, evapotranspiration rates were lower in the mine impacted site than the non-impacted site with average rates of 1.8 mm day-1 and 2.2 mm day-1, respectively. Impacts of watershed runoff were masked by two consecutive dry seasons and the location of the watershed headwaters, which were mostly outside the cone of depression. When assessing the relatively smaller scale processes, the connectivity of the bogs, fen water-tracks and channel fen peatlands that dominate the landscape is important in feeding the rivers that provide fresh water to James Bay. In addition to increased vertical fluxes the bogs and fens in the mine impacted region experienced average downward gradients of 0.09 and 0.04 in 2011, respectively. This is again more than an order of magnitude higher than gradients measured at the non-impacted site. In addition, the bogs and fens also experienced water tables 20 and 17 cm further below the surface than the non-impacted site. Lower water tables in the bogs would result in the bog holding on to more water and provide less recharge to the adjacent fen systems. This would have a larger impact on a fen water-track system which relied on the bogs for half of their discharge. The channel fen system relied on its non-impacted head waters to help sustain water tables in the fen and to provide almost all of its recharge. The channel fen system received only about 1.5% of its total discharge from the adjacent bog. With only 14.5% of the North Granny Creek watershed impacted by, the hydrological function of the entire watershed is more driven by seasonal climate variations than the mine dewatering. This area of impact is small relative to the size of the James Bay Lowland, but the changes are indicative of possible declining water tables in response to a warming climate, thus, declining connectivity of these bog-fen systems.