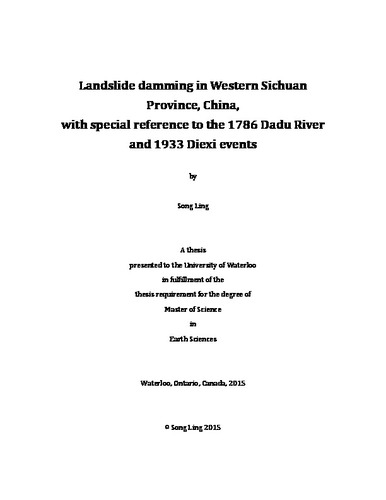 Landslides and landslide damming events can be triggered by various processes, and they can also cause catastrophic damage. With the help of historical documents and Geographic Information System (GIS), historical landslide damming events in Western Sichuan are investigated and reconstructed, in order to derive new data and knowledge. This thesis contains four chapters. The first chapter presents a broad introduction to landslides and landslide-dammed lakes in China. Damage and distribution of these events are introduced, triggers to landslides, longevity of landslide dams are briefly illustrated; several large landslide damming events in Sichuan are discussed as examples, including the 1786 Dadu River, 1933 Diexi, 1967 Tanggudong, and 2008 Tangjiashan cases. A detailed study of the 1786 Dadu River event is presented as the second chapter. Compared to the previous work, new information to this historical event is discovered. A new landslide site that is more consistent with most historical documents is proposed, and a dammed lake formed by the landslide is defined and measured. A maximum pool height of 1,300 m asl, and a volume of 1.15Gm3 is derived. The estimated pre-breach dammed lake is one of the largest landslide-dammed lakes in Chinese history. Based on the 100,000 deaths the event caused, it is the most catastrophic landslide dam breaching event in world history. The analysis of the 1933 Diexi event is presented as the third chapter. Precise locations of earthquake-triggered landslides are determined. Area and volume of the three lakes that formed in the Min River are calculated based on previous work and ArcGIS, and the surface area as well as volume of the lakes in different time eras are calculated. Further calculations and estimations of the initial source of the landslides, cross-section profiles, volume of water released, and outburst flood discharge are also presented in the chapter. The results shown that volume of the Diexi Lake before failure reached 450Mm3, and approximately half of the volume (200Mm3) breached during the 1933 flood. The peak flood discharge of the dam breach was estimated to be 20,000m3/s. The research on the Diexi event shows its scientific significance: 1) Diexi Lake was one of the largest landslide lakes in China, and its failure was one of the most catastrophic that occurred in high population density areas throughout Chinese history; 2) the Diexi landslide dams show a combination of landslide dam failure as well as long-term dam stabilization; 3) no surveying data can be found in the Diexi area from the 1930s, which means that estimation has to be made based on research in the Min River valley before the 1933 earthquake, and observation of the Diexi Lake before its failure. A study of the relationship between magnitude and frequency of natural hazard event is presented as the fourth chapter. Since the magnitude and frequency relationship of natural hazards can be expressed as a robust power law regression, which can be used in quantitative risk assessment, a brief investigation is carried out on M&F correlation of historical earthquakes in the different areas, landslides that caused damming, and dammed lakes in China. Results found in this research are compared to previous work by others, and characteristics of the natural hazard frequencies are illustrated. The study shows that the magnitude of damming landslides in China has a similar trend compared to the worldwide dataset. Also, China is prone to more small dammed lakes than the world average, reflecting its rugged tectonically-active geomorphology.