Thermoelectric Properties of Materials Based on Double Filled Type-I Clathrates 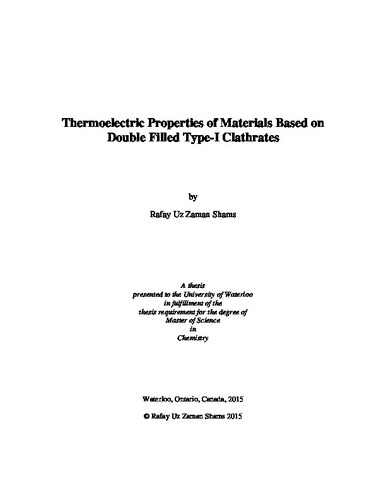 Energy consumption is at an all-time high. However, abundant energy is lost as waste heat. Thermoelectric materials are of interest within the scientific community due to their ability to convert waste heat into useful electricity. Their application is limited though because of low efficiency. Type-I clathrates were discovered as potentially high performing thermoelectric materials after Slack proposed his PGEC (Phonon-Glass-Electron-Crystal) concept in 1995. Type-I clathrates, which are semiconducting caged structures, have remarkably low thermal conductivity due to scattering of phonons by caged atoms which act as rattlers. Ba8Ga16Ge30 has emerged as the leading candidate for clathrates. Here we investigate the effects of double filling the clathrate cages with lanthanide (Ln) elements along with Ba on the thermoelectric properties of Type-I clathrates with the formula Ba8-xLnxGa16Ge30. Ln elements, La and Eu, have been successfully used as substitute elements. Ba8-xLaxGa16Ge30 and Ba8-xEuxGa16Ge30 have been synthesized successfully. All the compounds have been prepared by solid-state reaction. Powder X-ray diffraction (PXRD) results indicate that the samples are pure phase Type-I clathrates after initial synthesis. Clathrates crystallize in PmA3¯EAn space group. All clathrates were found to be n-type semiconductors. Temperature dependencies of the electrical conductivity, σ, Seebeck coefficient, S, and thermal conductivity, κ, have been measured in the range from 300 K to 850 K for several La and Eu double filled clathrates. La inclusion causes an increase in the thermoelectric figure-of-merit of up to 8% with Ba7.9La0.1Ga16Ge30 displaying a ZT of 0.66 at 780 K. Eu inclusion causes an increase in figure-of- merit up to 13% with Ba7.8Eu0.2Ga16Ge30 displaying a ZT of 0.69 at 770 K.