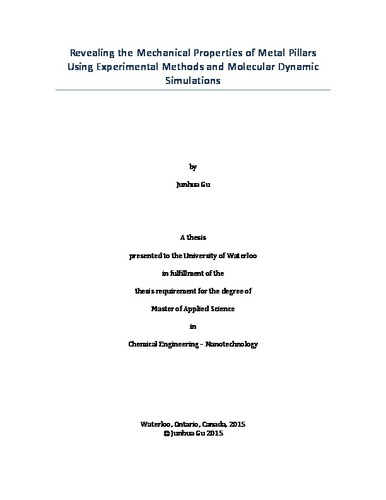 The mechanical properties of nano-crystalline copper pillars were investigated by both experimental methods and Molecular Dynamic Simulations in this study. Electron beam lithography and electroplating were used to fabricate the nano-crystalline copper pillars with various cross-sectional geometries, namely solid core, hollow, c-shaped, and x-shaped. These as-fabricated copper pillars possess three different average grain sizes, which were achieved by changing the compositions of the plating solution. Uniaxial micro-compression tests were applied to deform these nano-crystalline columnar structures. Classical Hall-Petch relationship was observed between the large-grain specimens and medium-grain specimens. An inversed Hall-Petch relationship emerged as the grain size continued to go down to the small grain size region. The mechanical behavior exhibited no signs of sensitivity to the cross-sectional geometries. To understand the deformation mechanisms, Molecular Dynamic Simulations were performed on nano- crystalline copper pillars with different dimensions. The as-constructed models displayed different mechanical behaviors under compressive and tensile deformation. This so-called compression-tension asymmetry was believed to be associated with free surface alongside the nano-crystalline pillars, where the free surface energy made opposite contributions under compression and tension. An inversed Hall-Petch trend was also observed between the nano-crystalline copper columnar structure with the grain size of 13 and 6 nm.