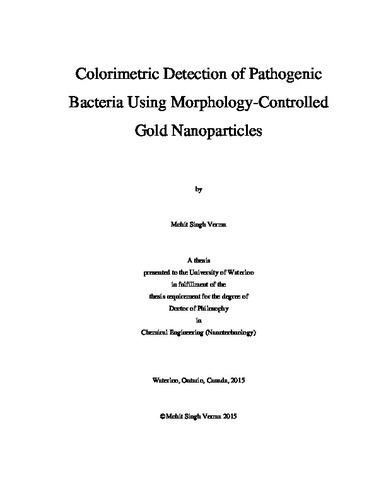 Simple and rapid detection of pathogens is crucial for preventing and treating infectious diseases. Conventional methods for pathogen detection are based on cell cultures and could require several days. The use of nanotechnology and specifically, gold nanoparticles has facilitated the development of biosensors that can potentially be used at the point-of-care because they provide a colorimetric output. A systematic literature review demonstrates that most instances of gold nanoparticles are in the detection of amplified nucleic acids but these methods require specialized equipment. There is a growing drive for making the biosensors simpler and more sensitive such that they could be employed outside the laboratory. This thesis focuses on the development of a gold nanoparticle-based biosensor that has the potential to rapidly detect and identify pathogens at the point-of-care. The biosensor consists of cationic gold nanoparticles that aggregate around target bacteria and produce a color change, which can be observed visually and quantified spectrophotometrically. Combining nanoparticles with various sizes and shapes creates a “chemical nose” biosensor, which uses a unique combination of responses to represent each target of interest, in a manner similar to the human sense of smell. This “chemical nose” biosensor can discriminate between bacterial species based on their cell wall components. This approach produces a versatile biosensor that can be deployed for a variety of applications as opposed to biofunctionalized nanoparticles, which are typically limited to a single target. Development of the biosensor begins with the synthesis of gold nanostars because this shape allows control over size and degree of branching, both of which govern the optical properties of the solutions. Gold nanostars are synthesized by a surfactant-assisted seed-mediated growth method. Increasing the surfactant concentration increases the degree of branching while increasing the amount of seed decreases the particle size. The cationic surface facilitates electrostatic aggregation of the nanostars on the negatively charged bacterial cell wall. This aggregation allows a rapid visual detection of Staphylococcus aureus, a model Gram-positive pathogen. The colorimetric response of gold nanostars depends on the intrinsic size and morphology of particles. Discriminating between bacteria of different species is important for accurate diagnosis. The ability of gold nanostars to identify the species of bacteria is explored by targeting ocular pathogens that are currently affecting contact lens wearers. Using two different degrees of branching of gold nanostars, a “chemical nose” biosensor is developed, where colorimetric response from each type of nanostar is different for each bacterial species. The biosensor is able to discriminate between saline control and four species of bacteria at the same concentration with 99% accuracy. Transmission electron microscopy demonstrates that this discrimination in colorimetric responses is because of different degrees and patterns of aggregation of gold nanostars around bacteria. In addition to identifying the species of bacteria, some applications require detection at various concentrations. Thus, the “chemical nose” was tested for the detection of eight species of bacteria at three different concentrations and an accuracy of 89% was obtained by analyzing the absorption spectra of the gold nanoparticles. Additionally, the potential of the “chemical nose” to detect polymicrobial infections was demonstrated by measuring the colorimetric response of mixtures of bacteria. The “chemical nose” was able to discriminate between Staphylococcus aureus, Escherichia coli, Pseudomonas aeruginosa, and their binary and tertiary mixtures with 100% accuracy. Implementation of the “chemical nose” biosensor at the point-of-care requires a rapid response. This is possible by acquiring absorption spectra at a faster rate. Using a portable charge-coupled device spectrophotometer, the “chemical nose” was able to distinguish between mixtures of bacteria within two minutes of data acquisition. This was possible by exploiting the kinetics of color change, which is unique for each bacterial species and their mixtures. Additionally, within each mixture, the bacteria seem to maintain their patterns and extent of aggregation of gold nanoparticles as confirmed by transmission electron microscopy. Finally, the effect of morphology was further studied using two Gram-positive and two Gram-negative bacteria. Gold nanoparticles with different shapes – nanospheres, nanostars, nanocubes, and nanorods – were incubated with the bacteria to obtain a concentration dependent response. While the responses were similar for Gram-positive bacteria, there were significant differences for Gram-negative ones with the order of decreasing response being: nanostars> nanocubes> nanospheres > nanorods. Additionally, the concentration of gold nanoparticles determines the range of concentration of bacteria that can be detected. This thesis demonstrates that detection, identification, and quantification of bacteria could be possible using gold nanoparticles for applications in food, water, and environmental contamination. In these applications, gold nanoparticles have exploited intrinsic properties of the nanoparticles and analytes to provide specific responses. Thus, gold nanoparticles exemplify the tremendous potential offered by nanotechnology.