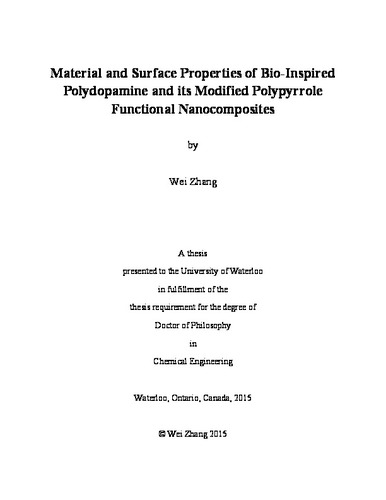 Inspired by marine mussel adhesives, the dopamine (DA) polymerization process has been introduced as a versatile deposition method to coat almost all kinds of material surfaces and form a nanoscale polydopamine (PDA) thin film. Although the DA polymerization mechanism and the PDA structure have not been fully explored, PDA films have gained great interest for their promising applications, such as anti-corrosion coating, drug delivery, biosensing and nanocomposite functionalization. In this project, we started with the fundamental investigations of the surface, adhesion, friction and cracking properties of PDA thin films. A series of surface characterizations and mechanical tests were performed to reveal the static and dynamic properties of PDA films coated on glass, polydimethylsiloxane (PDMS) and epoxy substrates in both dry and wet conditions. The systematic studies of the PDA film provide insights into its stability, mechanical and adhesive properties; further investigations are focused on the effective transferring of this nano-material to functional devices and biocompatible coatings. To achieve this goal, we combined PDA with polypyrrole (PPy), which is one of the most extensively investigated electrically conductive polymers because of its economic preparation, long-term stability and good biocompatiablity. After being functionalized by PDA, the PPy morphology changed from globular to fibrous; the adhesion between PPy film and glass substrates was enhanced due to the PDA self-adhesion property and the use of proper DA/pyrrole (Py) ratios also improved PPy conductivity. All of these new features significantly improve PPy processability and broaden its potential applications. In order to understand the effect of DA on Py polymerization, we performed a detailed and systematic investigation using three types of bioinspired catechol derivatives simple catechol (CA), L-3,4-dihydroxyphenylalanine (DOPA) in addition to the dopamine and 2-pheny-lethylamine (PA) in the synthesis of PPy. These studies provided strong evidence that catechol modification can be applied as a general protocol to functionalize conducting polymers to overcome their poor water dispersibility and low interfacial adhesion of PPy. Although DA-PPy has shown promise in many biological applications, its conductivity still requires further improvement, especially at higher DA/Py mole ratios. As a result, we developed new synthetic approaches to the preparation of DA-PPy nanostructures, which have both improved electrical conductivity and water dispersibility. Moreover, we explored the suitable application of each as-fabricated nanomaterials depending on the DA/Py reacting mole ratio. In particular, DA-PPy produced using a 0.032 DA/Py mole ratio demonstrated superior capacitance for supercapacitors, DA-PPy obtained from a 0.064 DA/Py mole ratio can be used as co-fillers in the epoxy network to prepare functional composites for electrically conductive adhesives (ECAs), DA-PPy synthesized from a 0.64 DA/Py mole ratio was found to have the impressive capability of absorbing electromagnetic microwaves for electro-magnetic interference (EMI) shielding applications. Due to the synergetic effect of DA modification, conducting polymer DA-PPy exhibit multifunctional and unique properties, which opens a brand new field of nanomaterial syntheses and applications.