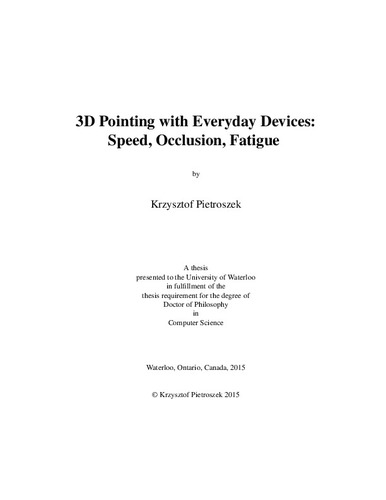 In recent years, display technology has evolved to the point where displays can be both non-stereoscopic and stereoscopic, and 3D environments can be rendered realistically on many types of displays. From movie theatres and shopping malls to conference rooms and research labs, 3D information can be deployed seamlessly. Yet, while 3D environments are commonly displayed in desktop settings, there are virtually no examples of interactive 3D environments deployed within ubiquitous environments, with the exception of console gaming. At the same time, immersive 3D environments remain - in users' minds - associated with professional work settings and virtual reality laboratories. An excellent opportunity for 3D interactive engagements is being missed not because of economic factors, but due to the lack of interaction techniques that are easy to use in ubiquitous, everyday environments. In my dissertation, I address the lack of support for interaction with 3D environments in ubiquitous settings by designing, implementing, and evaluating 3D pointing techniques that leverage a smartphone or a smartwatch as an input device. I show that mobile and wearable devices may be especially beneficial as input devices for casual use scenarios, where specialized 3D interaction hardware may be impractical, too expensive or unavailable. Such scenarios include interactions with home theatres, intelligent homes, in workplaces and classrooms, with movie theatre screens, in shopping malls, at airports, during conference presentations and countless other places and situations. Another contribution of my research is to increase the potential of mobile and wearable devices for efficient interaction at a distance. I do so by showing that such interactions are feasible when realized with the support of a modern smartphone or smartwatch. I also show how multimodality, when realized with everyday devices, expands and supports 3D pointing. In particular, I show how multimodality helps to address the challenges of 3D interaction: performance issues related to the limitations of the human motor system, interaction with occluded objects and related problem of perception of depth on non-stereoscopic screens, and user subjective fatigue, measured with NASA TLX as perceived workload, that results from providing spatial input for a prolonged time. I deliver these contributions by designing three novel 3D pointing techniques that support casual, "walk-up-and-use" interaction at a distance and are fully realizable using off-the-shelf mobile and wearable devices available today. The contributions provide evidence that democratization of 3D interaction can be realized by leveraging the pervasiveness of a device that users already carry with them: a smartphone or a smartwatch.