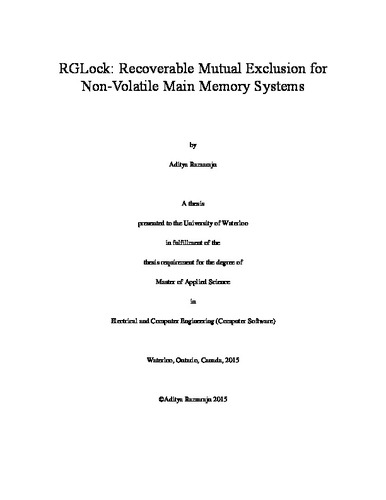 Mutex locks have traditionally been the most popular concurrent programming mechanisms for inter-process synchronization in the rapidly advancing field of concurrent computing systems that support high-performance applications. However, the concept of recoverability of these algorithms in the event of a crash failure has not been studied thoroughly. Popular techniques like transaction roll-back are widely known for providing fault-tolerance in modern Database Management Systems. Whereas in the context of mutual exclusion in shared memory systems, none of the prominent lock algorithms (e.g., Lamport’s Bakery algorithm, MCS lock, etc.) are designed to tolerate crash failures, especially in operations carried out in the critical sections. Each of these algorithms may fail to maintain mutual exclusion, or sacrifice some of the liveness guarantees in presence of crash failures. Storing application data and recovery information in the primary storage with conventional volatile memory limits the development of efficient crash-recovery mechanisms since a failure on any component in the system causes a loss of program data. With the advent of Non-Volatile Main Memory technologies, opportunities have opened up to redefine the problem of Mutual Exclusion in the context of a crash-recovery model where processes may recover from crash failures and resume execution. When the main memory is non-volatile, an application’s entire state can be recovered from a crash using the in-memory state near-instantaneously, making a process’s failure appear as a suspend/resume event. This thesis proceeds to envision a solution for the problem of mutual exclusion in such systems. The goal is to provide a first-of-its-kind mutex lock that guarantees mutual exclusion and starvation freedom in emerging shared-memory architectures that incorporate non-volatile main memory (NVMM).