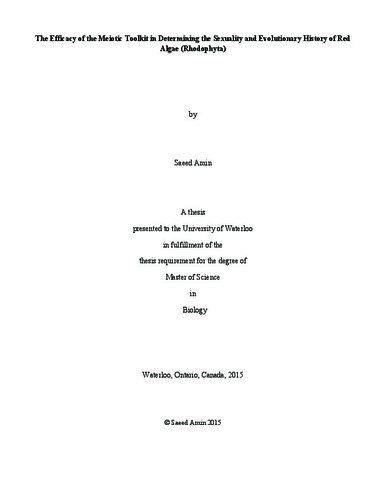 Meiosis is a unique mechanism and fundamental process that is shared by sexually reproducing eukaryotic species. Species that undergo meiosis can be determined by identifying the presence of core meiotic genes also known as the “Meiosis Detection Toolkit”. These genes include the following: SPO11, HOP1, HOP2, MND1, DMC1, MSH4, MSH5, MER3, and REC. Red algae (Rhodophyta) represent a distinct eukaryotic lineage with a long evolutionary history that dates 1.2 BYA and is represented by a fossil that exhibits characteristics of meiosis. Nonetheless, sexuality has never been observed in unicellular red algal species in the order Cyanidiales (Galdieria sulphuraria and Cyanidioschyzon merolae) and the Porphyridiales (Porphyridium purpureum). To understand the evolution of meiosis in red algae, this study examined the usefulness of the meiotic toolkit to determine the presence of sexuality as well as the utility of these genes as taxonomic markers for the evolutionary history of the red algae. This study used the available red algal genomes of G. sulphuraria, C. schyzon merolae, C. crispus, and Porphyridium purpureum. As a secondary objective, the genomic DNA of several sexual and asexual red algal taxa were experimentally examined to identify and compare the meiotic genes using a variety of biotechnological methods such as degenerate polymerase chain reaction (PCR) and sequencing analyses. Of the nine core meiotic genes, MND1, which is the essential meiotic gene for nuclear division and new recombination, has been observed in the Porphyra rediviva nuclear genome and appear to contain premature stop codons. Moreover, annotated amino acid sequences of six core meiotic genes (DMC1, MND1, SPO11, HOP2, MSH4, and MSH5) were used in the phylogenetic analyses. The data set included animals, fungi, plants, excavates, alveolates, and red algae. The phylogenetic trees indicated that the sexual and unicellular red algae possess the six core meiotic genes and some of these putative genes appear to be associated with horizontal gene transfer (HGT) and gene duplication events followed by subsequent losses in some of eukaryotic lineages. The results of this study suggest one of two possibilities. Either there is cryptic meiosis in the unicellular red algae that contain these genes, or these genes play alternative roles and are a poor marker for meiotic potential. The phylogenetic tree analyses also suggest that the meiotic toolkit is a not a good source of genes to use for taxonomic classification.

SAEED AMIN (2015). The Efficacy of the Meiotic Toolkit in Determining the Sexuality and Evolutionary History of Red Algae (Rhodophyta). UWSpace. http://hdl.handle.net/10012/9472