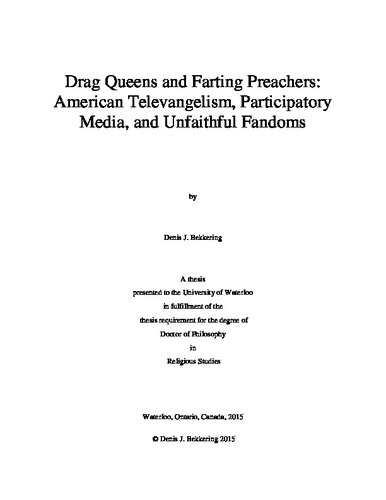 Studies of religion and fandom have generally considered sincere devotion a fundamental point of contact between the two cultural phenomena, an assumption not reflected in fan studies proper. This dissertation aims to expand the scope of research on religion and fandom by offering cultural histories of “unfaithful” fan followings of three controversial American televangelists – Robert Tilton, Tammy Faye Bakker/Messner, and Jim Bakker – dating from the 1980s to 2012, and consisting of individuals amused by, rather than religiously affiliated with, their chosen television preachers. It is argued that through their ironic, parodic, and satirical play with celebrity preachers widely believed to be religious fakes, these unfaithful fans have engaged in religious work related to personal and public negotiations of authentic Christianity. Additionally, it is demonstrated that through their activities, and in particular through their media practices, these fans have impacted the brands and mainstream representations of certain televangelists, and have provoked ministry responses including dismissal, accommodation, and counteraction.