The effect of inconsistent affective cues on children's judgments of speakers 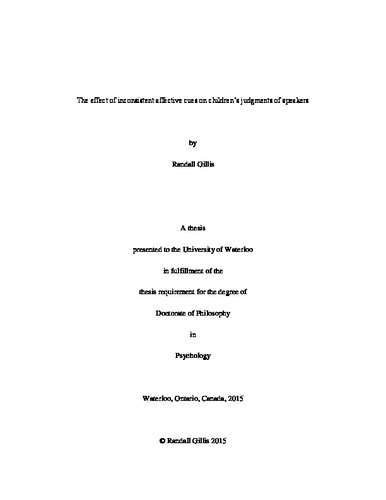 What speakers say is sometimes incongruent with the manner in which it is said. As a result, listeners are exposed to inconsistencies in communication: for example, when a speaker’s words are discrepant with her demonstrated emotions (e.g., a positive statement said in a negative tone of voice). While inconsistencies may be exploited by speakers to produce nuanced communication (e.g., verbal irony), they also introduce ambiguity, which may render the speaker a less credible source of information. The present work outlines three studies examining the extent to which children make credibility discriminations based on the consistency of a speaker’s lexical and non-verbal cues. In Study 1, when children were provided the opportunity to solicit novel information from video-recorded speakers, or unknown speakers, school-age children (7- and 8- year-olds) preferred to solicit information from consistent speakers to a greater extent than inconsistent speakers (e.g., those who provided a negative statement in a positive tone of voice). In contrast, preschool-age children (4- and 5- year-olds) did not show a preference for consistency and avoided speakers who showed any negative valence (lexical or nonverbal). Study 2 demonstrated that school-age children’s preference for consistent speakers did not extend to a context where children had to decide whether to solicit information about a speaker’s personal preferences. Further, across Studies 1 and 2, school-age children’s ratings of speakers were influenced by speakers’ consistency when the attribute being judged was related to information acquisition (e.g., believability, weirdness of speech), but not when it was a general characteristic (e.g., friendliness, likeability). In Study 3, 9 and 10 year old children demonstrated flexibility in their credibility judgments by preferring to solicit information from inconsistent speakers if the speaker was aware of a situational context that normalized the inconsistency. Together the findings from the three studies indicate that school-age, but not preschool-age, children can detect emotional inconsistency in speaker cues, use this information to form speaker credibility judgments, and use contextual information to think flexibly about speakers’ credibility.