What is the Nature of Anxiety-Related Attentional Bias to Threat? 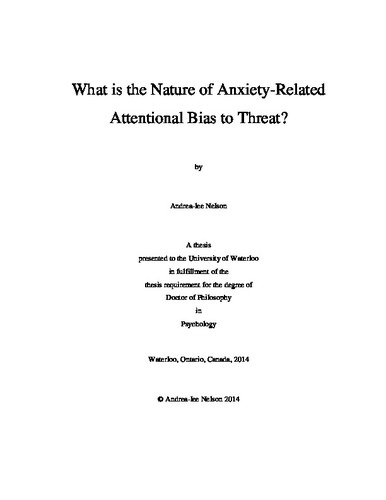 Although attentional biases to threat (ABT) are thought to contribute to the development and persistence of anxiety disorders (e.g., Matthews & Mackintosh, 1998; Mogg & Bradley, 1998), it is not clear whether such biases in high trait and clinically anxious individuals are characterized as vigilance in directing attention towards threat (i.e., vigilance hypothesis) and/or a delay in disengaging from threat once it has been detected (i.e., maintenance hypothesis; Weierich, Treat, & Hollingworth, 2008). Furthermore, some researchers have suggested that anxiety disorders are maintained when vigilance for threat is followed by avoidance over time (i.e., vigilance-avoidance hypothesis; Mogg & Bradley, 1998). Thus, further research clarifying the nature of anxiety-related ABT over an extended time course is needed. In the current program of research, I conducted three studies using a free viewing eye movement paradigm where participants were presented with pairs of images, one that was threat-related and one that was neutral, while their viewing behaviour was monitored over time. Study 1 indicated that while all participants showed a general vigilance-avoidance pattern to threat over time, trait-anxiety was not associated with ABT over a 3000 ms time course. However, in Study 2 when state anxiety was elevated, HTA individuals showed a greater proportion of viewing time assigned to threat stimuli than those low in trait anxiety when averaged over the 3000 ms time course, indicating a greater maintenance of attention following threat detection. Vigilance for threat was found in all participants for emotional stimuli in general. In Study 3, the relative contribution of trait and state anxiety on ABT was assessed by manipulating state anxiety levels within-participants and the data indicated that state anxiety, rather than trait anxiety, was associated with an increase in the maintenance of attention on threat over a 5000 ms time course. Overall, the results suggest that early vigilance for threat and the maintenance on threat over time are likely more normative process involved in an effective threat detection system rather than maladaptive processes that predict vulnerability to anxiety and anxiety disorders. Further theoretical and clinical implications, as well as areas for further study, are discussed.