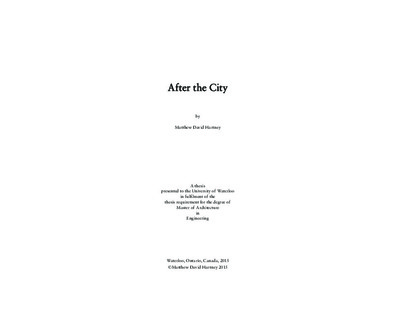 This thesis is an anthology of stories, mappings, photographs, and thoughts about Detroit. It is an analysis of the post-metropolis, the most modern city in the world, and the events and convulsions that have brought it into being. It describes the city that was, that which remains, and the city that may again be. It is also an account of my journey to find that city and to walk its streets as a brother. Detroit is not simply a collection of roads and buildings and people, however many or few, but rather it is an ecology of interdependent and often competing desires. Its story is the story of the building of the modern world, and its fall is the beginning of that worlds end. In a city defined by erasure and unbuilding, the role of architecture is unclear. It can provide the language to describe the structure of the city and the pieces that remain - it can suggest possible futures, but cannot realize them alone. Just one of the constellation of forces that have conspired to make the city on the straits, architectural, landscape, and urban design have become useful tools for those seeking to reconstitute Detroit for their own ends, with often uneven results. This thesis seeks to reconcile the city, not to remake it. It is not an intervention.