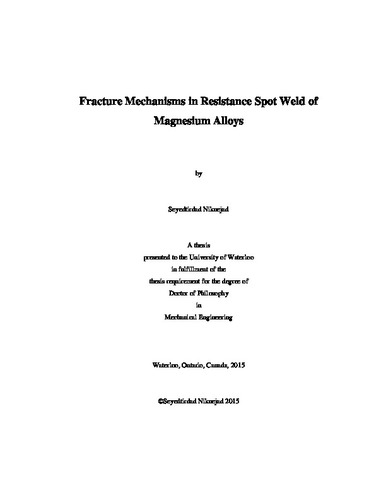 The automotive industry is adopting the application of magnesium and magnesium alloys in order to produce light-weight auto-body structures. Therefore, it is essential to evaluate the load bearing capability of these metals in spot welded applications, since spot welding is widely used to assemble the body components. Failure of spot welds is one of the major durability issues of auto-body structures in monotonic, cyclic and impact loading conditions. Spot weld performance is a special concern because of the operation of a localized stress field at the edge of each weld nugget. The load-bearing capability of a spot weld depends strongly on the toughness of the microstructure existing at the edge of the nugget including fusion zone and heat affected zone. Therefore, any microstructural feature which deteriorates the toughness properties is considered to be detrimental to the structural integrity of a spot weld. This study attempts to assess the effects of microstructure on failure characteristics and mechanical performance of magnesium spot-welded structures in monotonic loading. Microstructural evolution in resistance spot welding of AZ31, AZ61 and AZ80 magnesium alloys has been studied. The results indicated formation of β-Mg17(Al,Zn)12 divorced eutectic phase at the grain boundaries of both fusion zone and heat affected zone. As the Al content of the magnesium base alloy increased from 3 wt.% (AZ31) to 6 wt.% (AZ61) and 8 wt.% (AZ80), the volume fraction of β phase increased both in heat affected zone and fusion zone. It was found that with increase in volume fraction of the β phase, tensile shear properties of spot welds were adversely affected. Microstructural examinations identified the β intermetallics as preferred sites for micro-crack initiation in monotonic loading of spot welds. It was found that as the Al content of base metal increased from 3 wt.% (AZ31) to 6 wt.% (AZ61) and 8 wt.% (AZ80), the load-to-failure and elongation-to-failure of spot welds (with almost identical nugget diameter) decreased. At the same time, the failure mode changed from interfacial (in AZ31) to nugget pull-out (in AZ61 and AZ80). Removal of the β phase particles via post-weld solutionizing treatment was found to increase the weld strength and ductility of high Al-bearing magnesium spot welds (i.e. AZ61 and AZ80). Failure mode also changed from nugget pull-out to through-thickness. With the absence of β intermetallics in the microstructure of post-weld heat treated welds, plasticity occurred near the edge of nuggets under load, which introduced resistance against crack initiation. The plastic zones could be identified by observation of heavily twinned microstructure near the crack region. Inspection of misorientation boundaries between the parent and twinned segments revealed the role of {1 0 1 ̅ 1}-{1 0 1 ̅ 2} double twinning, which essentially involved rotation of ⟨1 2 ̅ 1 0⟩/37.5° relative to parent, on formation of transgranular micro-cracks. This twinning mode intensified the shear stresses resolved onto the basal slip systems, leading to early shear localization and transgranular void/crack initiation. It was argued that the susceptibility of an individual grain to transgranular cracking depended strongly on its orientation relative to the stress condition. Those grains in which the stress field created a high shear stresses onto their {1 0 1 ̅ 1} twinning systems were more susceptible to transgranular fracture. The primary {1 0 1 ̅ 1} twinning mode was found to follow a Schmid-type behavior in most of the studied grains. For AZ61 and AZ80 magnesium sheets with sharp basal texture, the stress condition under loading at the coarse-grained microstructure of the heat affected zone resulted in high activity of {1 0 1 ̅ 1} twinning. Therefore, the heat affected zones of these AZ alloys were susceptible to transgranular fracture. The heat affected zone in ZEK100 sheet, demonstrated higher toughness. Due to its fine-grained microstructure along with more randomized texture, heat affected zone of ZEK100 exhibited lower twinning activity. Therefore, in tensile shear loading of AZ80/ZEK100 dissimilar spot weld (in post-weld heat treated condition), fracture occurred preferentially in the heat affected zone of AZ80, while the heat affected zone of ZEK100 demonstrated high resistance against fracture initiation. From the experimental-numerical work on fracture study in tensile shear loading of magnesium spot welds, it was concluded that the toughness of the material was associated with combined effect of stress condition and microstructure. This combined effect was further investigated by mechanical testing of magnesium sheet metals using double-edged notched tensile (DENT) specimens. In order to evaluate the effect of texture on the notch sensitivity, DENT specimens were made with notches whose tip was pointing to the sheet’s normal direction (for ND specimens) and transverse direction (for TD specimens). The mechanical test results for AZ alloys indicated that the strength and ductility of specimens with notches along the normal direction were lower compared to those with notches along the transverse direction. Schmid law numerical calculations were conducted based on the notch stress condition and crystallographic texture of the alloys to predict the activity of different deformation mechanisms (i.e basal slip, prismatic slip, {1 0 1 ̅ 2} twinning and {1 0 1 ̅ 1} twinning) at the notch root. The difference in notch sensitivity in ND and TD specimens was associated with an activity competition between prismatic slip and {1 0 1 ̅ 1} twinning. The numerical results predicted higher activity for {1 0 1 ̅ 1} contraction twinning at the notch root of ND specimens than that in TD specimens. The easy activation of {1 0 1 ̅ 1} twins in ND specimens, led to transgranular shear localization and early fracture; however in case of TD specimens, prismatic slip was more active at the notch root which led to more homogeneous deformation and delay in shear localization. Owing to its more randomized texture, ZEK100 alloy appeared to be less sensitive to the notch orientation.