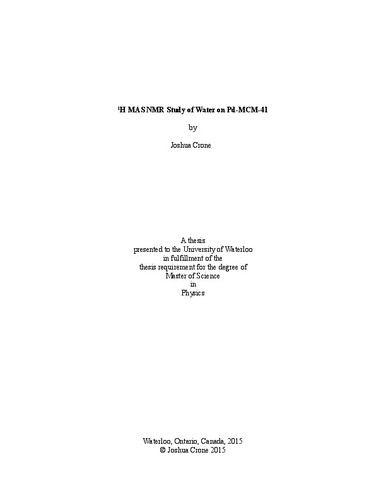 Hydrogen spillover represents one of the most promising avenues to achieve hydrogen storage at the density required for transportation applications. The spillover phenomenon, however, is a topic of much debate, with many conflicting results existing in the literature. The goal of this work is to thoroughly study and understand a system where spillover has been reported, palladium loaded MCM-41 (Pd-MCM-41), thus laying a groundwork favorable to accurate, conclusive work on the spillover phenomenon in the future. Specifically, the nature of the material and how water (an important factor in certain spillover systems) interacts with it are investigated. This information would not only benefit the study of spillover, but also any other application of Pd-MCM-41 where water is involved. 1H MAS NMR measurements were carried out on three mesoporous silica samples at a range of water hydration levels. The materials were unmodified (pristine) MCM-41, Pd-MCM-41 and reduced (ie. treated with H2 gas) Pd-MCM-41. The spectra from these samples were fit using a previously published model for water on pristine MCM-41, which was extended to account for differences in the current samples. The model was applied first to the pristine MCM-41 spectra. In the hydration range from 0.0 to 0.2 monolayers (ML) of water adsorbed on the pore surface, the results were similar enough to those from Walia's publication that they were used to aid and assess the fitting results of the Pd loaded samples. Additional features observed in the results for pristine MCM-41 were the appearance of a new peak at 0.5 ML, attributed to water condensing and filling sections of the pore volume, and the development of water-water interactions, which are typically absent at lower hydration levels. Two additional peaks, designated Pd Water Groups 1 and 2, are observed in the spectra of the palladized samples. Once these were added to the fitting model, the spectra were determined to be adequately fit by the model; features of the remaining peaks matched those in the pristine sample. Two models, labeled A and B, are presented to explain the differences between the results from pristine MCM-41 and Pd-MCM-41. In Model A, water dissociatively and preferentially adsorbs onto the Pd, causing water to condense around the metal clusters. This multilayer water phase exchanges with water on the pore surface, resulting in Pd Water Group 1. Pd Water Group 2 is attributed to the first layers of water molecules strongly bound to Pd. Model B, which relies on Pd causing nearby water to have a large chemical shift, is shown to be unlikely. The main reason is that the chemical shift of this Pd shifted water is required to increase with increasing water hydration level in order to reproduce the observed chemical shift of Pd Water Group 1. For this and other reasons, Model A is concluded to be the most probable description for the behavior of water on Pd-MCM-41, based on the results presented.