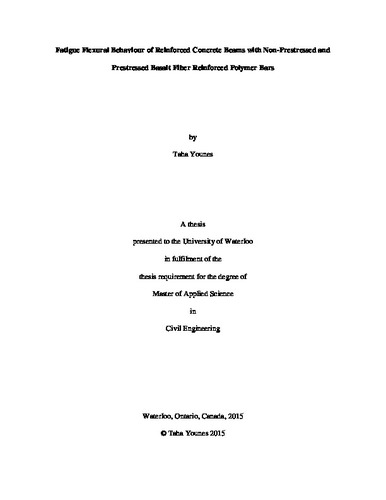 Basalt fibers have recently been introduced as a promising alternative to the existing fiber reinforced polymer (FRP) family. The mechanical properties of basalt FRP (BFRP) bars are, generally, better than those of glass FRP (GFRP) bars. However, they are still lower than those of carbon FRP (CFRP) bars. Also BFRP bars have now been developed that have a higher modulus of elasticity than typical GRFP bars. Only a limited amount of research is available on BFRP bars in structural concrete applications and there is no information on the performance of prestressed basalt bars in reinforced concrete elements subjected to fatigue loading. Most studies that are available deal only with the flexural behaviour of concrete beams reinforced with non- prestressed and prestressed GFRP and CFRP bars under monotonic and fatigue loading. This thesis presents an experimental study of the flexural behaviour of concrete beams reinforced with non-prestressed and prestressed basalt bars under monotonic and fatigue loading and compares these beam fatigue results with the fatigue behaviour of similar machined basalt rebars tested under fatigue loading in air. Sixteen beams with dimensions of (2400⨉ 300⨉150mm) and thirteen BFRP bare rebars were tested. The parameters that varied were the level of prestress of the bars (0%, 20% and 40% of their static tension capacity) and the fatigue load ranges. The experimental findings showed a difference in the long life fatigue strength between the beams prestressed to 40% 20% and 0% of the bar strength with the beams with the bars prestressed to 40% of the bar strength showing a higher fatigue strength than of those prestressed to 0% and 20%. For 40% and 20 % prestressed beams, there is no benefit in fatigue performance above 20% and 13% of the ultimate capacity of the beams a level at which calculations showed that the remaining prestress did not close cracks at the minimum load in the fatigue load cycle. When compared on the basis of load range versus cycles to failure, the data for the three beam types fell onto a single curve at load levels where the remaining prestress after fatigue creep relaxation no longer closed the crack at the minimum load.