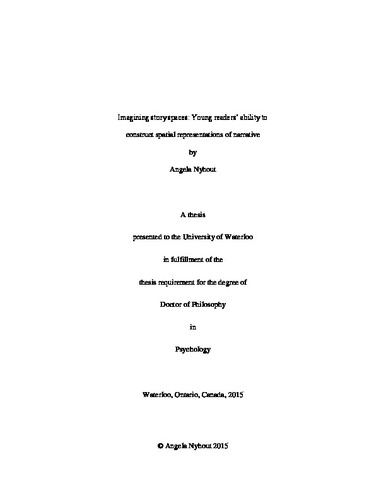 Narratives are ubiquitous in human experience. They are the bestsellers we read on the beach, the news stories we read online, and, most commonly, the anecdotes we hear from our friends and family. Narrative comprehension involves creating a situation model, a non-verbal representation of the situation described by a text or spoken language (Zwaan & Radvansky, 1998). Whether and when children are able to create these representations is an important question for developmental research. Across 4 studies and using varying methodologies, I investigated children’s ability to mentally represent the spatial aspect of narratives – in particular, to construct spatial situation models – at an age when they are becoming independent readers (6 to 8 years). In Studies 1 and 2, I investigated children’s and adults’ ability to construct physical representations of narrative and non-narrative passages after listening. Both age groups constructed more accurate models from narratives than non-narrative passages. Performance on narrative and non-narrative versions of the task were associated with different cognitive and linguistic abilities, with performance on the narrative version significantly correlated with narrative comprehension, and performance on the non-narrative version significantly correlated with verbal working memory. In Study 3, I investigated 7- and 8-year-olds’ ability to represent spatial information during narrative listening, as measured by their enactment of a character’s movement. Children enacted significantly more explicitly stated movements than movements that had to be inferred. But importantly, the ability to infer movements was significantly predictive of narrative comprehension. In Study 4, I investigated 6- through 8-year-olds’ spontaneous processing of spatial information during narrative listening using an inconsistency detection task. Children listened to a series of short stories, some of which contained inconsistencies in either the spatial or goal-based fabric of the narrative. Children showed delayed processing in response to inconsistencies of both types compared to narratives with no inconsistencies. Together, these studies suggest that children can and do represent narrative spatial information, and that this ability may be an important building block of the comprehension process. This work has implications for both theoretical and educational accounts of language comprehension.