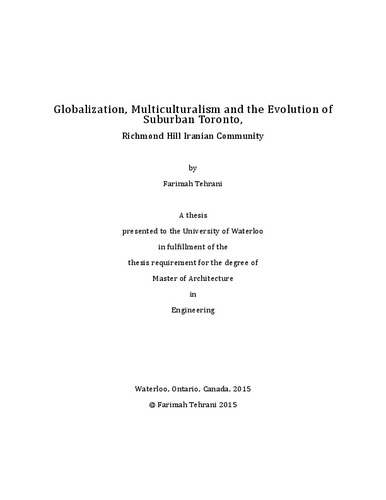 Canadian cities and their built form will continue to evolve as they are affected, by trends in globalization and its consequent mobilization of populations in mass immigration. This thesis investigates the impact on the buildings of the suburban areas that immigrant communities move to, and proposes to develop design strategies to establish a common built identity for communities shared by Canadians and new immigrants seeking a life in Canada. This Architecture will deal with the impact of mass migration of North American Suburb and the creation of the ethnic enclaves. In particular, how the Iranian immigrant community can manifest their traditional building formats in the new urban context of the Toronto suburb of Richmond Hill. The research is based on the study of the joint form and functions of typical buildings, both in Iranian traditional cities and the suburbs of Toronto. The concern of the design case studies is to develop a new interpretation building form and function, which answers to the needs of Iranian-Canadian citizens of Richmond Hill. Each interpretation is based on a transformation of a Canadian suburban building type using the forms, uses, and culturally defined habits found in the traditional Iranian architecture. This thesis is looking at hybridized architecture, which combines the original architecture of home culture and standardized commercial and residential architecture of North American suburb. This study presents a house project as a private realm and represents a public realm; a café, and shopping plaza.