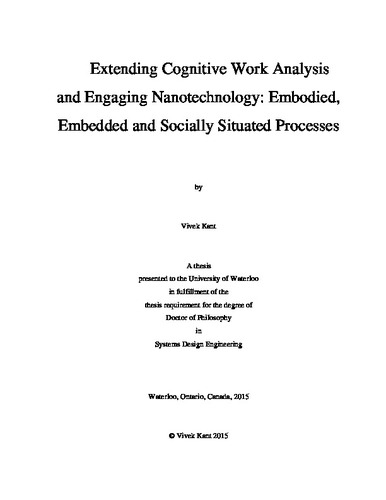 With current advances in material science and the growth of novel technologies, the nature of human technology interaction is changing. Specifically, the growth and convergence of Nano-, Bio-, Info- and Cognitive Science (NBIC) related technologies has resulted in the emergence of new systems, which requires considerations of the embodied, embedded and socially situated aspects of the human behavior for advanced interaction with intelligent and responsive environments. Currently, Cognitive Work Analysis (CWA) and the associated Ecological Interface Design (EID) are well positioned to draw requirements from these future smart environments; however, the role of the body in human knowing and acting as currently conceptualized in CWA requires further development. This thesis extends CWA by addressing the role of the body in human knowing and acting. Further, it also extends CWA by making the link between interpretive social approaches to human knowing and acting (specifically, symbolic interactionism) and CWA. Thus, this thesis supports the conception of the human in advanced technological environments as an embodied, embedded and socially situated construct. In this thesis, CWA was extended at a fundamental level. This strategy required returning to the basic assumptions of CWA derived from Rasmussen’s approach. A considerable portion of this thesis scrutinizes the fundamental assumptions of CWA by revisiting Rasmussen’s papers and highlighting the engineering dimension of his approach. CWA is then extended via consideration of Rasmussen’s approach along with other theoretical approaches from ecological psychology, action theory and symbolic interactionism, in order to produce a framework for gathering requirements for interface design. In this extended CWA, the first step allows for an interpretative understanding of the user’s traditional ways of knowing and acting. Whereas the second step consists of an analysis amenable for eliciting the design requirements. To show the applicability of the new extended framework, the work domain of nanotechnology is chosen. A field study was conducted in the area of nanotechnology that comprised of three subdomains pertaining to devices, robotics and materials. The requirements derived from these three areas were compared between the standard CWA and the extended CWA. In all the three cases the extended CWA supported the traditional CWA, as well as provided a greater number of requirements pertaining to the role of the body and the social dimension of activity in human knowing and acting. Therefore, this shows that the theoretical extensions have a practical feasibility in terms of using the extended CWA.