Design, Analysis and Optimization of a Cherenkov radiation based sub-mm/THz BWO 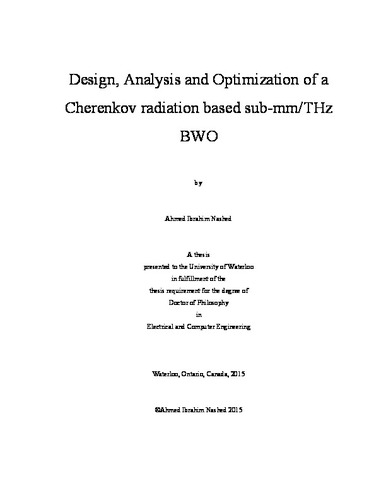 The Terahertz (THz) radiation –also known as “T-ray and THz gap”– refers to a certain band of the electromagnetic spectrum whose frequency extends between 0.1THz and 10THz. Compared to the microwave band, the THz radiation has higher frequency. Therefore, it can be used for high capacity wireless communication and high resolution imaging application. Furthermore, several applications –such as biomedical imaging and spectroscopy – can be designed to use the unique material response to the THz radiation. The lack of an appropriate (stable, compact, high power and reasonably inexpensive) THz radiation source has held up the progress in these THz potential applications. Powered by the advance in the modern micro-fabrication techniques along with the huge progress in the computational resources/tools, several THz radiation sources have been introduced. These sources can be classified as; vacuum sources, solid state source and laser and photonic sources. Among these sources, the Vacuum Electronic Devices (VEDs) demonstrate the highest average power. Therefore, it can be used to accomplish both the compact size and the sufficient generated power requirements for the THz source. Since the parameters of the VED –such as the operating frequency, the power conversion efficiency and the bandwidth– are defined from the Slow Wave Structure (SWS) design, the SWS is considered as the key element in the VED radiation source. The design of the VED source is performed in two steps; the cold analysis and the hot analysis. While, the design of the SWS is performed in the cold analysis, the hot test deals with the electron beam-wave interaction and the electromagnetic field generation. In this work, the Photonic Crystal (PC) structure is used to design a novel Double Defected PC (DD-PC) based SWS. Compared to other SWSs, the DD-PC structure has no axial discontinuity, which facilitates the fabrication of the SWS. Additionally, the generated THz radiation is extracted from the defects, which is located away from the electron beam. Hence, the electron beam-wave interaction process is not affected. Moreover, since the DD-PC based SWS is a metallic structure, it can be used for high THz power radiation. Taking advantage of non-uniform Finite Difference Frequency Domain (FDFD) method, the design of a DD-PC based SWS operating at 130GHz was performed. Due to the complexity of the SWS and electron beam-wave interaction, the hot analysis was carried out using a numerical analysis. The numerical simulation can be divided into two connected sub-simulations; the electromagnetic field simulation and the particle simulation. While, the Finite Difference Time Domain (FDTD) analysis is used as the electromagnetic field simulator, the physical parameters of the electron beam were calculated using the Particle In Cell (PIC) simulation. The FDTD/PIC simulation was used to analyze the performance of several Backward Wave Oscillators (BWO) designed using the DD-PC based SWS. Furthermore, the FDTD/PIC was used to optimize the BWO parameters for maximum THz radiation. To reduce the simulation time, a parallel Open Multi-Processing (OpenMP) version of the FDTD/PIC tool was created and implemented. To alleviate the high acceleration voltage required for the electron beam in the BWO using the DD-PC based SWS, the Axial loaded Double Defected Photonic Crystal (ADD-PC) based SWS was implemented at 200GHz. Starting from the band gap diagram, the ADD-PC based SWS was designed. Then using the High Frequency Structural Simulator (HFSS), an optimization of the SWS was performed. Then, the design of the SWS was verified using the HFSS probe-wheel experiment. The performance of the BWO using the ADD-PC based SWS was investigated using the FDTD/PIC simulation. Finally, to show the potential of the proposed SWS, a BWO operating at 650GHz was presented using the ADD-PC based SWS. The FDTD/PIC simulation results, of the proposed BWO, indicate that an output power of almost 8W at 650GHz with 1.8% conversion efficiency can be achieved.