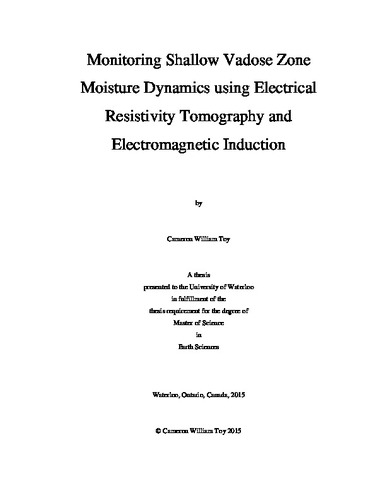 This hydrogeophysical study examines the capacity of the surface electrical resistivity tomography (ERT) and electromagnetic induction (EMI) methods to monitor soil moisture dynamics in the shallow vadose zone over the range of conditions encountered during multiple annual cycles. High-resolution ERT and EMI surveys were performed to monitor changes in shallow moisture conditions at a vineyard located in Vineland, Ontario, Canada. Twenty-five metre profile lines were established at five monitoring sites with soil textures ranging from silty clay to silt loam. ERT surveys were performed at each of these five sites whereas EMI data were acquired at only three of these monitoring sites due to the presence of wire trellises at the other sites. Geophysical surveys were performed approximately every two to four weeks. The geophysical data set is supplemented by precipitation and temperature observations, as well as historic soil temperature readings to 3 meters depth, taken at a nearby weather station and gravimetric water content measurements obtained at each monitoring site. The combination of the multi-year monitoring period, dense temporal sampling interval and concurrent use of both the ERT and EMI methods, as well as the supplemental weather and gravimetric information make this a very unique hydrogeophysical data set. A wide range of soil moisture conditions were encountered at the monitoring sites including wet spring and fall, dry summer, and frozen winter periods, as well as contrasting conditions between the two annual cycles (e.g., relatively wetter versus drier summer conditions). Temporal variations observed in both the ERT and EMI data qualitatively agrees well with shallow soil moisture conditions (i.e., the upper most 0.50 meter) inferred from the gravimetric measurements and weather data. In addition, ERT results for the subsurface below 1 meter appear to follow the historical pattern of soil temperature. In addition, there is very good qualitative agreement between the ERT and EMI data set in terms of their temporal and spatial variability. However, a quantitative analysis of the relationships between gravimetric data, soil temperature and geophysical data reveals that additional work is needed to understand the nature of these relationships. Further, a basic quantitative comparison of the ERT and EMI results reveals divergences that require more investigation.