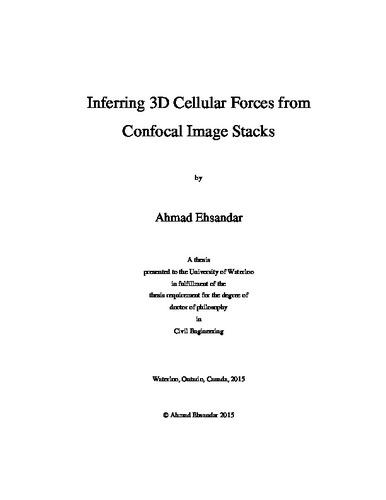 If we are to understand why cells move in contexts such as early embryo development, wound healing, cancer metastasis and construction of engineered organs, and if we are to learn how to better influence their associated medical outcomes, we must learn how to determine, in detail, the forces that are involved in cell movement and shaping. Significant progress has recently been made in this direction through force inference techniques that allow us to estimate the net forces along individual cell-cell and cell-medium interfaces, in epithelia and other two dimensional (2D) aggregates, from images and time-lapse movies. The goal of this thesis is to show how current 2D force inference techniques can be extended to three dimensional (3D) systems. As part of this process, I developed a software toolbox to accurately digitize cell outlines of 2D images extracted from a confocal stack. The digital information was then used to construct a 3D aggregate. These 3D reconstructions allowed the calculation of cell contact angles and face curvatures which were then used to build force balance equations for each set of contact angles. Together, these equations were used to calculate, a self-consistent, scalable set of values for the interfacial tensions along each cell-cell and cell-medium interface. If experimental values are available for some of these tensions, then the set can be properly scaled. The equations assume the system to be static, with all forces and junctions in equilibrium. To be consistent with this assumption, image sets with negligible amounts of deformation over time were used in this work. To validate the proposed algorithm in this thesis, it was applied to computer-generated synthetic data sets for which the ground truth tensions and pressures were known. The synthetic data was generated for two different aggregate sizes generated by two completely different techniques. A smaller patch included fifteen cells generated by the Voronoi technique, whereas a larger patch included thirty three cells generated with software named “Surface Evolver”. Both geometries were annealed and then sliced along the z-axis to generate a synthetic image stack. The 3D code is equipped with two different face fitting algorithms for estimating contact angles: sphere fitting and point cloud projection. Analysis of the results demonstrated that a hybrid method in which external cells are fitted with spheres, and internal cells are fitted with point clouds, leads to the best tension calculations (within 6% of their true values). The accuracy of the results depends on the number of slices over the entire aggregate. The author determined that having nine slices per cell is the minimum for obtaining face tensions with error of less than 10%. Analysis of biological data showed a good match between the tensions calculated using this approach and those obtained from physical experiments.