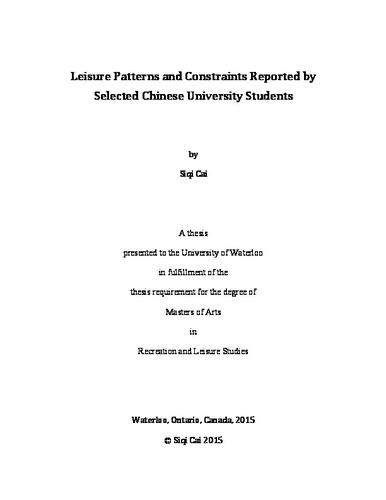 Leisure constraints research has been well established in the past three decades. However, the dominant studies have been conducted in the western settings, and are based on the western cultures and values. Hence, the research subjects from the “WEIRD” societies, which refer to Western, Educated, Industrialized, Rich, and Democratic, are not representative of the world population. Asia is the most populous continent, and China reports the largest population in the world. Yet few studies have focused on this population. The recent China Leisure and Well-off Index report showed that only 36.5% of Chinese people felt satisfied with their leisure and 25% felt unsatisfied. They encountered various constraints associated with leisure activities, which limited their participation and reduced their enjoyment. Additionally, changes within the Chinese society suggest that the role of leisure and leisure constraints may be evolving. However, most of the studies in China focus on only one aspect of leisure, which is tourism. When it comes to leisure constraints, the research subjects are typically disadvantaged groups such as older adults and women. University students are rarely studies in this context. This research aims to establish a descriptive and fundamental knowledge of Chinese university students’ leisure behavior, including leisure patterns, leisure constraints, and how contextual and personal variables relate to leisure satisfaction. Three research questions were explored: (1) what are the leisure patterns of selected Chinese university students? (2) To what extent are these students constrained by intrapersonal, interpersonal, and structural constraints (including loss of face). (3) What are the roles played by contextual and personal variables in establishing students’ satisfaction level with their leisure? Participants were recruited from two universities in Southern China. A quantitative questionnaire was distributed online through Bulletin Board System and WeChat. Findings suggested that Chinese university students tended to pursue easy, affordable, and accessible ways to engage in leisure activities. The activities that they took part in most often were all related to electronic devices, which require little or no special equipment, skills, fields, or teammates. For the most part, the participants were sedentary during these leisure activities. They spent more of their leisure time indoors rather than outdoors, and they spent very little money on leisure. In regards to leisure motivations, the main purpose for Chinese university students to seek leisure was to relax and to escape. In addition, it was found that Chinese university students often reported structural factors as their most problematic constraint. Interpersonal constraints, which referred to relationships and connections with other people, constrained the participants to some degree. Intrapersonal were not a big issue overall, yet self-face constraints were considered significant among this population. We acknowledge that the target participants exhibited considerable homogeneity. Resulting lack of variability in the sample may have masked some of the complexity that undoubtedly existed within the Chinese population. The findings of this research offer practical implications for leisure providers in China.