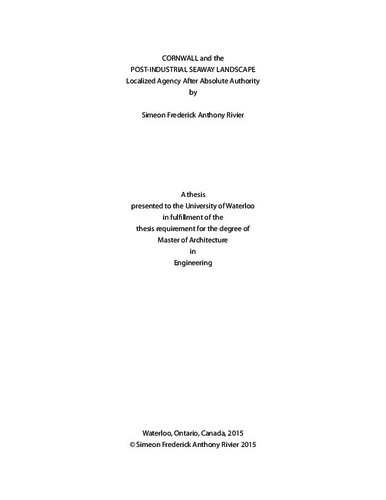 In the 1950s the Ontario city of Cornwall was the site of a massive industrial infrastructural project, the St. Lawrence Seaway. The Seaway Project was a modernist dream intended to spur development of an industrial utopia. Following the completion of the Seaway Project, global economical shifts precluded the aspirations for an industrialized Seaway and the planning of the modernist industrial utopia was never realized. Today, Seaway traffic continues, but without any benefit to the local communities it promised to improve. These waterfront communities no longer have an economic or architectural relationship to the St. Lawrence River. The Seaway Project has muted the waterfront identities of these towns and cities and many former industrial sites along the waterfront are now either abandoned or contaminated. Today, many of the towns and cities along the St. Lawrence River border are economically depressed and are searching to find ways of reinventing themselves. This thesis proposes a new design vision for the Cornwall Canal Lands, and it is meant to be applicable to all the communities along the St. Lawrence River border. The approach is not fixated on singular outcomes but rather sees urbanism as a process dependent on time and human agency. This proposal utilizes three very specific frameworks in expanded roles; the existing infrastructure as a network, the post-industrial requirement of environmental regeneration, and interpersonal interactions. Creating the armature for moments of interpersonal interactions is paramount in the new design vision. The renewed emphasis on the waterfront community creates the opportunity to build and strengthen community. The three frameworks, designed over four phases of duration, form a post-industrial design vision; based on local citizen based involvement, sustainable form of city-making and local experimentation that integrates existing urban morphology.