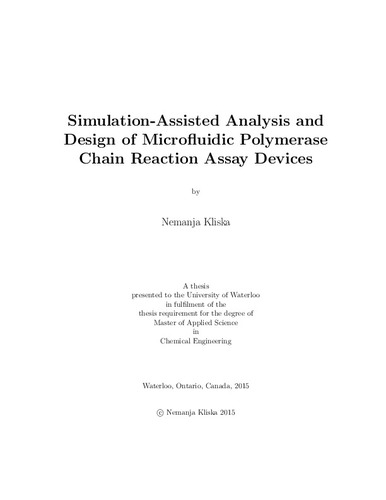 The Polymerase Chain Reaction (PCR) is a method by which sample DNA can be sequentially copied in order to increase the concentration of the sample DNA so that it can be measured directly. Interestingly, only specific DNA segments selected by the operator are amplified, if those segments are present in the sample then one will see DNA amplification otherwise nothing will be amplified. As a result, assays can be tailored to detect a wide range of disorders including bacterial infections, viral infections, and even genetic abnormalities/disorders. PCR is a thermally actuated process where the chemistry is governed by the temperature of the reaction chamber. By adjusting the temperature of a PCR reactor through a set of three simple steps the concentration of target sample DNA is roughly doubled at the end of each cycle. However, the reactants are very temperature sensitive. As a result precise temperature control is required in order to conduct a successful PCR run. With the advent of microfluidics, PCR has been miniaturized onto lab-on-chip systems. These systems have many advantages over their conventional counterparts (laboratory scale biological assay with bench-top thermal cycling systems) such as reduced cycling times and reduced reagent costs due to smaller sample volumes, increased automation due to on-chip integration with other modules (for other process steps), and reduced power consumption due to better integration with heating systems. However, the design of these microfluidic systems also has its unique challenges. High thermal gradients throughout the system are commonplace; as a result it is difficult to ensure thermal uniformity within the reaction chamber. Furthermore, it is difficult to correlate the measured temperature of external temperature probes with the temperature of the reactor itself. Lastly, it is very difficult to experimentally measure the real-time temperature profile of the PCR chamber, since any sensor perturbs the system greatly. The work presented within this report will focus on the thermal design of typical microfluidic PCR reactors. Our analysis is focused on using simulation-aided-design to offer insights that serve to validate and optimize the performance of these exemplary reactors. In order to do this, we modified OpenFOAM, an open-source CFD simulation suite that relies on the Finite Volume Method, to include a heat generation term as well as PID control. We first focused on running transient simulation in the absence of control in order to optimize the physical design of our example reactor. Subsequently, we investigated the effect of feedback control on the sample system in order to validate the results obtained experimentally. In order to do this we emulated the entire experimental system and matched the control scheme/parameters used experimentally. What we found was that our simulations were able to provide insights that were otherwise unobtainable. We were able to map the full 3D temperature field of the system in a high fidelity transient simulation. Using this data, we determined that placement of the temperature sensor was crucial to the performance of the device. Furthermore, we discovered that manifold layers relatively far away from the reactor chamber had a profound effect on the temperature measured by out temperature sensor. As a result, the design was modified to include an additional heat spreading layer so that the measured temperature would better reflect the temperature of the chamber. Moreover, our open loop simulations illustrated that simple 1D analytical models were not adequate to predict the performance of microfluidic PCR systems. Our second set of simulations focused on studying how PID control affects the temperature profile of the system over time. Originally experimental validation was done on the optimized system. It was found that the design did not successfully amplify the target DNA sequence, likely due to the amplification of primer-dimers. Using our simulation methodology analysis we found that the heating/cooling rate of the system was position dependent. In our specific example, our temperature sensor was closer to the heating element; thus reaching target temperature well before the reactor itself. Our simulations identified transient discrepancy between the measured temperature and the reactor temperature. Using this information we were able to adjust the control scheme of the experimental system which resulted in successful amplification. Overall the simulation-aided-design exercise has been invaluable in troubleshooting and optimizing the design of microfluidic PCR devices.