Analyzing the impacts of road construction on the development of a poor fen in Northeastern Alberta, Canada 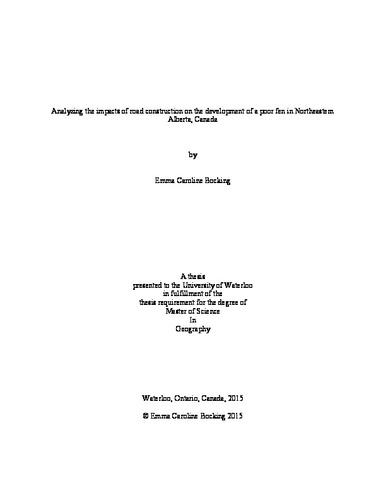 Linear disturbances such as powerline rights of way, seismic lines and roads are common in areas of intensive resource development. Roads that bisect wetlands can alter their hydrologic connectivity on a local or landscape scale. These impacts were studied in a poor fen located 45 km south of Fort McMurray, Alberta, where a raised road was built across the northern fringe of the fen in 1977. Examination of the fen’s response to this impoundment provided insight into post-disturbance vegetation succession patterns and peatland development. The objectives of this study were to map the spatial and temporal extent of hydrological disturbance from road construction, to quantify the response of peatland vegetation to this disturbance and to determine the successional pathway of the system. The study site is an 8 ha poor fen situated on Stoney Mountain (~740 masl), about 45 km south of Fort McMurray in the Athabasca oil sands region of northeastern Alberta. The dominant groundcover of the fen is Sphagnum moss, with Ericaceae shrubs and Picea mariana (black spruce) also abundant. Construction of the raised road began in 1977, and the fen now drains through a culvert built under the road in the northwest corner. Complete tree dieback occurred within 220 m up-gradient of the road. Tree rings were used as a proxy for hydrological change, because depth to water table is the main limiting factor for growth in peatland trees. Forty-two living and dead black spruce trees in the peatland were sampled and used for analysis, and 18 in the surrounding upland hillslopes. Dead trees were cross-dated using a combination of the list method and skeleton plots, and verified with COFECHA. Tree ring chronologies were built in R, and correlation coefficients between climate and ring width index (RWI) values for each chronology were calculated in Dendroclim2002. Water table was measured weekly at three groundwater wells and bulk density of the peat was calculated at several locations across the fen. In sixteen 50 m2 (25x2 m) transects, recent moss growth was calculated by measuring the depth to the root crown of black spruce trees. Tree density and the age of saplings were also measured in these transects. Vegetation cover, along with several abiotic variables was measured in 279 1 m2 plots. Vegetation was analyzed in the statistics program R using Non-metric Multidimensional Scaling and Ward’s Minimum Variance cluster analysis. The upland tree chronology had less ring width variability than the peatland tree chronologies, and the peatland RWI had a stronger relationship with climate than the upland RWI. After road construction, there is a positive relationship with temperature in the year of growth for living and dead trees, and a mixed response to precipitation especially in June and July. Most of the trees within 220 m up-gradient of the road died in 1989, and these are all located within an elevation of 83.5 cm relative to the culvert top. Temporal uniformity of dieback suggests a single flooding event in 1988 or 1989 that drowned these trees, and the relationship with elevation above the culvert suggests that its blockage caused the flooding. The impact of flooding from culvert blockage on fen tree cover underlines the importance of natural drainage patterns in controlling vegetation composition and peatland type. High bulk density values below the surface and loose Sphagnum moss carpets contribute to low storativity close to the culvert in the most disturbed area of the fen, as evidenced by rapid flooding and drying. The abundance of saplings decreases towards the culvert. The average depth of recent moss growth was greater immediately up-gradient of the road (37.6 cm) compared with undisturbed areas (15.5 cm). Analysis of vegetation using non-metric multidimensional scaling reveals dominance of non-hummock forming species closest to the culvert. These data suggests that periodic blockage of the culvert leads to flooding in the immediate area that encourages non-hummock forming species of sedge and moss, making an unfavourable environment for black spruce germination. This cycle of hydrologic disturbance may be preventing some areas of the fen from regaining the original vegetation structure, with implications for the system’s development. Both tree growth and vegetation structure continue to be impacted by past flooding events caused indirectly by road construction, and directly by inadequate drainage through the culvert. Maintaining a natural hydrologic regime is integral to maintaining the function of a peatland. This research has implications for peatland construction projects in the Athabasca oil sands, and the design and maintenance of linear features in this region and nationally.

Emma Bocking (2015). Analyzing the impacts of road construction on the development of a poor fen in Northeastern Alberta, Canada. UWSpace. http://hdl.handle.net/10012/9403