Evaluation of a Novel Glycoprotein on Commercial Contact Lenses 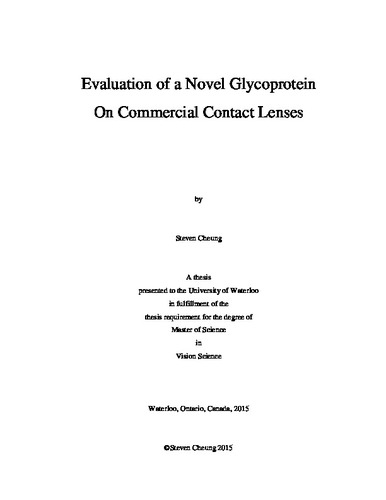 PURPOSE The purpose of this thesis was to evaluate the interaction of a novel glycoprotein, known as proteoglycan 4 (PRG4), with various commercial contact lenses. METHODS PRG4 was investigated for its effects on commercial contact lenses. Both bovine PRG4 and recombinant human PRG4 (rhPRG4) were examined on six silicone hydrogels (balafilcon A, senofilcon A, lotrafilcon B, comfilcon A, delefilcon A, narafilcon A) and one conventional hydrogel (etafilcon A). Lens parameters, such as material wettability, bacterial adhesion and viability, and location of sorbed PRG4, were investigated in the following: • The effect of PRG4 on the wettability of both commercially available silicone and conventional hydrogel lens materials was investigated in vitro. Additionally, the substantivity of PRG4 onto the lens surface was also examined (Chapter 3) • Using a novel labeling technique, rhPRG4 was fluorescently tagged and visualized, using confocal microscopy, to elucidate the sorption profile within various commercial lens materials (Chapter 4) • The antibacterial effect of bovine PRG4- and rhPRG4-treated lenses was investigated. Staphylococcus aureus was radiolabeled with 3H-uridine and the bacterial suspension was exposed to various lenses. The total bacterial adhesion was measured by using a Beta counter to detect the 3H isotope, and viability was determined using an agar plate counting method for each lens type (Chapter 5) RESULTS The lens material largely influences how PRG4 interacts with the contact lens. The presence of a surface treatment and/or ionically charged monomers has a significant impact on the wettability and sorption of PRG4. Generally, the incorporation of PRG4 onto relatively hydrophobic surfaces appears to enhance the surface wettability, though PRG4 exhibited greater substantivity on relatively hydrophilic surfaces. PRG4 did not demonstrate significant antibacterial properties against S. aureus. However, PRG4 did not significantly increase bacterial adhesion, even though proteins on lens surfaces are known to attract more bacteria. In addition, it is possible that PRG4 is denatured to a certain extent within the lens, which may ultimately serve as a source of nutrients for the bacteria to thrive on. Future work is required to investigate this supposition. CONCLUSIONS The results from this thesis have demonstrated that PRG4 can have a significant positive impact on lens material wettability and perhaps other metrics as well, which can possibly translate to enhanced lens wear comfort and lower drop-out rates. Since the lens composition is the major contributing factor in how PRG4 interacts with the material, lens manufacturers can potentially use this information to develop lenses to better incorporate PRG4 for various wear modalities. The unique combination of contact lens and PRG4 is a fairly novel area of research and has the potential for future additional studies.