Treatment of the Cyanotoxin Anatoxin-a via Activated Carbon Adsorption 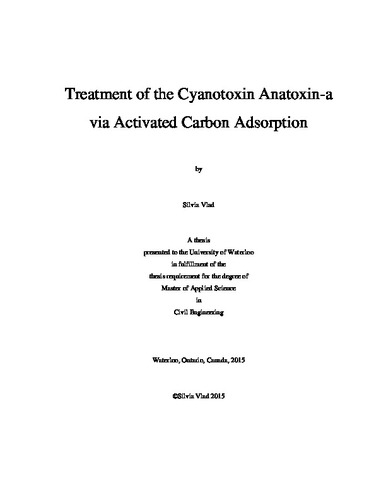 Cyanobacteria are bloom-forming aquatic microorganisms that impact many drinking water sources and can produce a variety of toxins, eponymously termed cyanotoxins. Three cyanotoxins are of particular concern in a North American context, as indicated by their inclusion on the USEPA’s third iteration of the Candidate Contaminant List (CCL3): microcystin, cylindrospermopsin and anatoxin-a. Of these, anatoxin-a (a potent neurotoxin) cannot be effectively oxidized by chlorine, indicating that conventional drinking water treatment plants may not have an effective barrier to this toxin. Investigation into treatment alternatives is needed; activated carbon removal of anatoxin-a has not previously been thoroughly studied, though granular and powdered activated carbon (GAC and PAC) are frequently used to remove other cyanobacterial metabolites. The primary objective of this research was to elucidate anatoxin-a adsorption behaviour during treatment with activated carbon. Two analytical methods for the quantification of anatoxin-a were evaluated: an enzyme-linked immunosorbent assay (ELISA) which had only recently become available, and a liquid-chromatography tandem mass spectrometry (LC-MS/MS) method. The ELISA method was deemed unsuitable for the planned treatment study, as it could not quantify (-)-anatoxin-a (one of the two stereoisomers present in the racemic (±)-anatoxin-a standard), had a relatively high variability in toxin detection, and was time-intensive. Comparatively, the LC-MS/MS method established was rapid, reproducible and capable of quantifying environmentally-relevant toxin concentrations (method detection limit of 0.65 µg/L) without sample pre-treatment. Anatoxin-a adsorption in ultrapure water was investigated using six virgin carbons: coal-based F400 and F300 GACs (Calgon Carbon), coconut-based Aqua Carb GAC (Siemens), wood-based C Gran and WV B-30 (Norit and WMV, respectively) GACs, and finally coal-based Watercarb 800 PAC (Standard Purification). The coal-based GACs (F400 and F300) required the greatest amount of time to reach equilibrium (up to 90 days for F300, the larger of the two carbons), but had the highest capacity of the virgin GACs. Conversely, the more mesoporous wood-based carbons were the fastest of the GACs to attain equilibrium (within 14 days), but had lower ultimate capacity at the concentrations examined (approximately 50% less than the coal-based GACs at 1 µg/L aqueous anatoxin-a concentration). Unsurprisingly given its microporous structure, the coconut-based Aqua Carb was relatively slow to reach equilibrium (45 days); its capacity was similar to those of the wood-based GACs at 1 µg/L aqueous anatoxin-a. The one coal-based PAC included in this study had both faster kinetics and higher capacity than the GACs, although depending on its application, the capacity of PAC may not always be fully utilized. Furthermore, intact cyanobacterial cells may be able to bypass PAC treatment only to be lysed and release intracellular toxin later in the treatment train. The five GACs were preloaded with natural organic material (NOM) at pilot scale for approximately 40,000 bed volumes, using post-sedimentation water from a full-scale southern Ontario surface water treatment plant. Based on bench-scale studies using the preloaded carbons in ultrapure water, the coal-based GACs retained the greatest capacity at aqueous anatoxin-a concentrations below 20 µg/L. A second sample of preloaded F300 carbon was obtained from a full-scale treatment plant where it had been in use for approximately 100,000 bed volumes, and isotherm studies indicated its capacity was approximately 40% lower than that of the pilot-preloaded F300, and 60% lower than that of the virgin F300. Interestingly, the preloaded GACs had slightly faster toxin uptake than their virgin counterparts; F400 and F300 in particular saw an increase in removal rate, an effect partially attributable to changes in carbon surface charge. It is postulated that the NOM-preloading resulted in lower repulsive interactions between the positively-charged coal-based GACs and the cationic anatoxin-a. Adsorption of anatoxin-a by the virgin carbons was also investigated in Grand River water (GRW), although difficulties with toxin degradation were encountered. In GRW (pH 8.0), anatoxin-a degraded by approximately 60% over 21 days, while positive controls in ultrapure water (pH 6.3) remained relatively stable. The observed change in stability may be partially attributed to pH sensitivity, as anatoxin-a becomes deprotonated at higher pHs and the deprotonated, neutral form is less stable than the cationic, protonated form. Based on equilibrium isotherms the five GACs had very similar capacity to one another in GRW, while the kinetic data show that the coal-based carbons again had the slowest toxin removal. Capacity reductions compared to the virgin carbons ranged from 15% (WV B-30, wood-based) to 69% (F400, coal-based), at a 1 µg/L aqueous anatoxin-a concentration. Overall, the findings indicated that adsorption of anatoxin-a using PAC and GAC is a promising treatment option, although further investigation is needed to confirm findings in other surface waters, and at a larger scale (i.e. pilot-scale). This research has implications for drinking water providers impacted by cyanobacteria, and may be a valuable aid in analyzing the advantages of different carbon types.