Assembly: A Revaluation of Public Space in Toronto 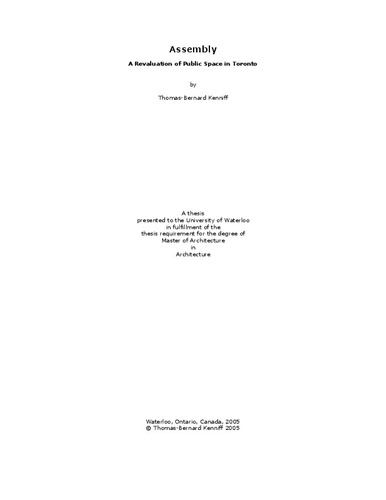 This thesis focuses on the problem of defining and designing public space in contemporary mass society. "Assembly" revaluates a cultural understanding of public space as the space of regulation, consumption and leisure, and works to find spaces of freedom, agency and action. Three iconic sites located in Toronto from three successive generations are examined: Nathan Phillips Square, the Eaton Centre and the new Dundas Square. These three sites form the primary division of the work and are respectively paired with extended critiques from three thinkers: Hannah Arendt, Jean Baudrillard, and Guy Debord. The pairings centre on Arendt's account of the "rise of the social", on Baudrillard's analysis of consumption and on Debord's dissection of the spectacle. The argument is presented in the form of an assemblage. Although the nature of this method invites each reader to construct their own meaning, this thesis grounds itself on a defined polemic. It considers public space to be marked by 1) the erosion of a clear distinction between our public and private realms, and their subsequent dissolution into the realm of the social, 2) the ideology of consumption overtaking the realm of the social, and 3) the world of the commodity replacing reality with the world of the spectacle. "Assembly" first consists of three main sections corresponding to the three sites. Each of these parts is assembled from three distinct strands: factual, theoretical and visual. The factual strand forms the main "field" of each section and is made up of selected quotations from mass media ? newspapers, public documents and websites. The theoretical strand, consisting of pointed quotations from the relevant social theorist, is threaded through the field of mass media. The visual strand comprises two elements: a postcard that marks the beginning of the section and a series of authored photographs that follows and complements the text-based assemblage. <br /><br /> Inevitably, the relationship between general social values and those of individuals is fraught. Consequently, and perhaps also inevitably, architectural design tends to reduce the manifoldness of the public realm into a homogenous and singular public space: the "whole". This thesis pursues the question of how to conciliate individual agency with collective public experience. The process and form of "Assembly" deliberately celebrates this uncertainty of design, and takes "heterogeneity" as a necessary condition of public space. That it cannot offer a comprehensive solution is, perhaps, inherent to the question.