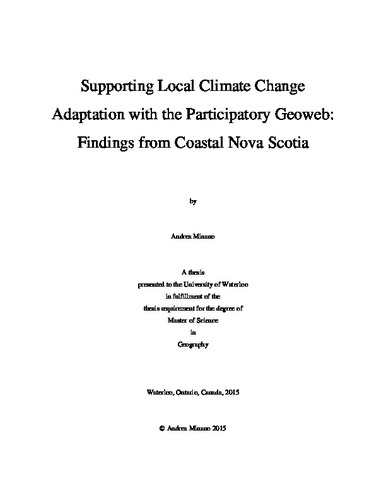 The effects of climate change have been detected in various natural systems in the last century (IPCC, 2014). As a consequence of these changes, governments are seeking to identify adaptive strategies for protecting citizens and vulnerable economic sectors (Adger et al., 2005; Smit & Wandel, 2006). Coastal areas are particularly susceptible to a changing climate as sea level continues to rise and storm surges become more powerful and frequent events. This research introduces the use of the participatory Geoweb as a tool (labelled “AdaptNS”) for supporting local climate change adaptation efforts in Shelburne County, Nova Scotia. AdaptNS serves as a visualization tool for displaying high-resolution interactive flood maps of sea level rise and storm surge scenarios between 2000 and 2100. The participatory aspect of this Geoweb tool is integrated as a means for decision-makers, stakeholders, and community members to identify adaptation priorities in response to climate change risks. This interdisciplinary approach was possible through the use of several technologies, including the Arcpy Python library for analysis, and a coupling of the Google Maps API and LAMP bundle for the front-end and back-end tool development. By using feedback from community members, AdaptNS was identified to support local adaptation by providing communities with comprehensive visuals of climate change risks, a platform for identifying adaptation priorities, and a means to communicate local risks to upper levels of government and businesses.